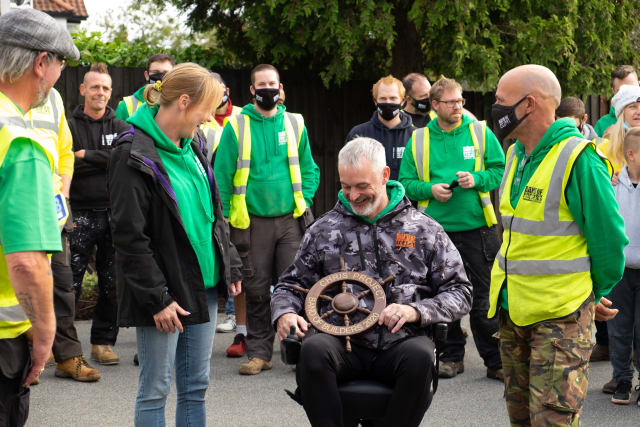 Kind-hearted builders teamed up to help a father-of-four with a rare brain condition to access his home on his mobility scooter.

Chris Joy, 42, of Norwich, was forced to give up work as a plasterer due to the degenerative neurological disorder cerebellar ataxia.

He spends half of his time in a wheelchair and suffers with double vision and issues with his balance and speech.

He had struggled to get in and out of his home because the driveway and pathway were too uneven for his mobility scooter.

The charity Band Of Builders, made up of tradespeople around the country, heard of Mr Joy’s plight and revamped his driveway.

They also landscaped the paths to the side of the house and installed a new lowered entrance door during the eight-day project.

The 25 volunteers gave up their time for free and used materials donated by various companies in the construction sector.

“We were here while the project was under way and the atmosphere was amazing, but seeing it complete for the handover and everyone who had been involved just blew us away.

“It might not seem like much to some people, but these changes will give me so much of my independence back, they’ll make a real difference.”

Band Of Builders volunteer Tony Everett, who was project leader, said: “Seeing the help this will give to Chris and his family is why we do what we do.”

– Band Of Builders formed in 2016 to help members of the UK construction industry who are battling illness or injury by completing practical projects for them.