Cecil Rhodes statue should be joined by sculpture of Nelson Mandela, peers told 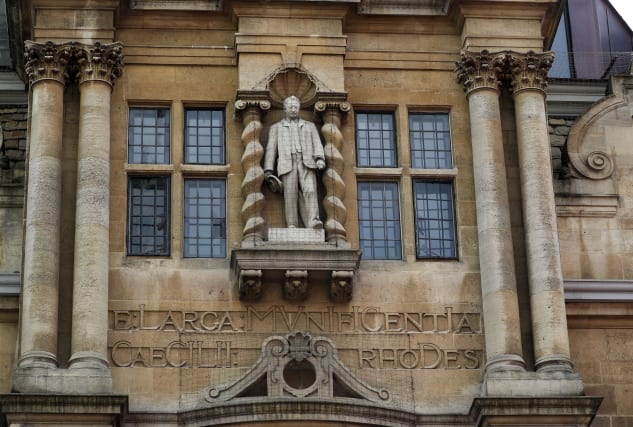 A controversial statue of Cecil Rhodes outside an Oxford college should be joined by a sculpture of Nelson Mandela rather than be removed, peers have heard at Westminster.

The call was made by independent crossbencher and former BBC governor Baroness Deech as she urged steps by the Government “to stop the destruction of important historical statues”.

It follows a long-running campaign demanding the removal of the monument to the British imperialist at Oriel College, which gained renewed attention amid the Black Lives Matter movement.

It has also fuelled the wider debate around statues of historical figures with links to colonialism or slavery.

Addressing the contentious issue in Parliament, Minister for Civil Society Baroness Barran said: “The Government policy on historic public statues is quite clear.

“They should not be removed but retained with a fuller contextualisation on the background and history of those commemorated provided, summarised as ‘retain and explain’.”

Following this up, Lady Deech, who is a board member of the Law Commission and served as chairwoman of the Bar Standards Board, said: “The wish on the part of some to eradicate our past in the belief that it’s evil does not justify vandalism.

“I am dismayed to see re-evaluation, often uninformed, of the contribution of historical figures most of whom have good and less good elements.”

There were “strong reasons” to remove the statue of Richard the Lionheart outside Parliament, she said, but added: “I am content to walk by him everyday knowing that the study of history places him in context.”

She went on: “Likewise with Cecil Rhodes in my home city.

“I maintain that he did more good than bad and should not be sacrificed to current concerns, but should be joined by a statue of Mandela.

“Will the minister do all she can to stop the destruction of important historical statues?”

Lady Barran described as “deeply troubling” scenes which had led to monuments having to be boarded up, including the statue of Sir Winston Churchill after it was daubed with graffiti accusing the wartime prime minister of being a racist.

Labour former cabinet minister Lord Browne of Ladyton said: “The erection of a statue is not an objective act but a subjective judgment of an individual’s historical contribution.

“Doe the minister agree that, just as the civic leadership of communities most often decided who should have a statue placed on a pedestal in public places, the modern equivalence and not ministers should be trusted to decide whose statutes are representative of a community’s current values?”

Lady Barran said: “Obviously local authorities are primarily responsible in this area and will take the view of their community into consideration.

“My understanding is that, with the most contested examples, there has not been a uniform community view but a divided one.”

Lord Woolley of Woodford, co-founder and director of Operation Black Vote, said: “Assessment of our statues in England is not a culture war as some would like to say, but rather an honest appraisal of who we put on a pedestal to be revered.

“Whilst we understand that no one is perfect and this is not an attempt to rewrite history, rather to better understand it.

“Some statues would be better placed in a museum with the full context explained rather than showcased in a grandiose way.”