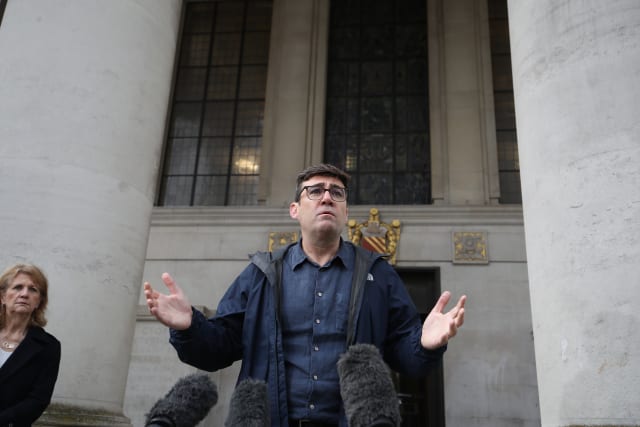 Greater Manchester Mayor Andy Burnham has continued to clash with the Government over lockdown restrictions for the region, as talks between him and Downing Street are set to resume.

The Labour mayor accused Boris Johnson of having exaggerated the severity of the situation in the region and called for Parliament to intervene to give Tier 3 areas sufficient financial support.

Cabinet Office minister Michael Gove on Sunday accused Mr Burnham of having engaged in political “posturing” and called for him to accept the measures “to save people’s lives”.

But, despite the continued war of words, a call was scheduled for Sunday between Mr Burnham and the Prime Minister’s chief strategic adviser Sir Edward Lister after confusion over whether talks would continue this weekend.

Mr Burnham and Conservative politicians in Greater Manchester oppose Tier 3 measures being imposed, with the mayor calling for greater financial support for workers and businesses.

Senior minister Mr Gove told Sky’s Sophy Ridge On Sunday: “I want to reach an agreement with the political leadership in Greater Manchester.

“I want them to put aside for a moment some of the political positioning that they’ve indulged in and I want them to work with us in order to ensure that we save lives and protect the NHS.

“Instead of press conferences and posturing what we need is action to save people’s lives.”

Mr Burnham accused the Prime Minister of having exaggerated the severity of the coronavirus situation in the region during a Downing Street press conference on Friday.

“It’s a serious situation but I don’t think it was the situation that was described by the Prime Minister on Friday evening,” the mayor told the BBC’s Andrew Marr Show.

“I think it was an exaggeration of the position that we’re in.

“Of course it’s a matter of concern, and we watch the figures very closely indeed, but the figures have been falling in Manchester itself in the last few days, across Greater Manchester up slightly but certainly not doubling every nine days.”

But despite the clash, Mr Burnham said he would speak to Sir Edward later on Sunday, which Downing Street confirmed after the two sides struggled to arrange talks the day before.

Mr Burnham reiterated his call for a return to the generosity of the furlough scheme when it covered 80% of workers’ wages if they could not do their jobs.

And he told MPs it was “everywhere’s concern” because all areas could end up in Tier 3 measures with the lower support package of a 66% subsidy for those whose firms are forced to shut.

“That’s why I’ll be writing to the Labour Party leaders in Westminster to ask them to intervene, for Parliament to intervene, here,” Mr Burnham told Marr.

“What we need here is a fair financial framework if the Government are going to insist on Tier 3 – at the moment, they’re doing side deals with individual councils, that isn’t good enough for me.”