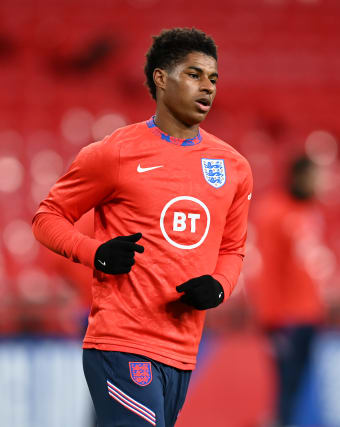 Marcus Rashford's petition urging the Government to act to end child poverty has surpassed 250,000 signatures, just two days after it was launched.

The parliamentary petition calls for food to be provided during all holidays and for free school meals to be expanded to all households on Universal Credit.

It comes as Labour called on the Government to provide free school meals during the holidays until the spring.

Calling on more people to sign the petition, England and Manchester United striker Rashford, 22, said: "Let's prove to these 1.5 million vulnerable children that being British is something to be proud of."

The Welsh Government will provide free school meals during the holidays until Easter next year.

However, Downing Street indicated on Thursday that ministers would not provide free school meals to children in England during the Christmas break.

A Number 10 spokesman said: "It's not for schools to regularly provide food to pupils during the school holidays."

Shadow education secretary Kate Green said "now is the time to act" as she warned more than a million children could be left hungry over the school holidays due to the impact of the pandemic.

The party is giving the Government 72 hours to extend the provision of free school meals during the holidays or it will force a vote by MPs.

Ms Green said: "Millions of families face the prospect of losing their livelihoods because the Government has lost control of the virus.

"Its sink-or-swim plans for support could leave more than one million children at risk of going hungry over the school holidays."

Rashford, who has been made an MBE for his services to vulnerable children, forced a Government U-turn on free school meal vouchers for eligible pupils over the summer holidays.

The Manchester United striker has since formed a child food poverty task force which has linked up with some of the UK's biggest supermarkets and food brands.

He said: "Right now, a generation who have already been penalised during this pandemic with lack of access to educational resources are now back in school struggling to concentrate due to worry and the sound of their rumbling stomachs.

"Whatever your feeling, opinion, or judgment, food poverty is never the child's fault. Let's protect our young. Let's wrap arms around each other and stand together to say that this is unacceptable, that we are united in protecting our children."