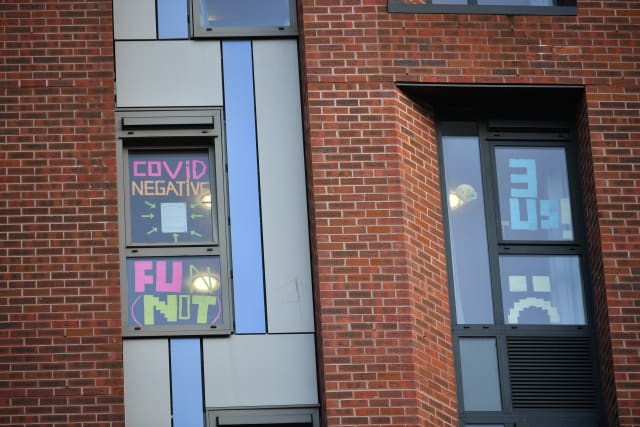 Universities in England could be instructed to switch from face-to-face teaching to online-only lectures in early December, while a two-week lockdown will allow students to return home for Christmas, it has been reported.

Prime Minister Boris Johnson previously said plans are being put in place to allow students to go home safely for Christmas, with figures suggesting more than 60 universities have confirmed cases of Covid-19.

The fortnight-long lockdown across universities would take place from December 8 to 22, according to the Guardian, which added that the plans are in their “early stages”.

But University and College Union general secretary Jo Grady said the proposals are “unworkable and chaotic”.

It came as a separate report in the Times said university students may be asked to attend seminars anonymously in an effort to frustrate attempts from foreign countries to monitor and ultimately stifle freedom of speech.

The new guidance by Universities UK, representing vice-chancellors, suggests students may be required to submit coursework anonymously to prevent them from being targeted by countries which apply laws beyond their borders.

The guidance does not apparently mention any country by name, though Ken McCallum, the new director-general of MI5, told reporters on Wednesday that hostile states such as Russia, China and Iran present threats to academic research and democracy.

Responding to the potential two-week lockdown for students on campus, Ms Grady said in a series of tweets: “Ministers want to place English universities into lockdown from 8-22 Dec, with students remaining on campus & teaching carried out online before returning home.

“This perverse obsession with Christmas is dangerous. Government must focus on the here & now!

“Universities are not boarding schools! Not everyone lives on campus. This ‘plan’ is unworkable and chaotic. These measures are highly undesirable but will also be impossible to deliver or oversee.

“How on earth does the government think they can propose doing this to students?!”

Education Secretary Gavin Williamson previously suggested students may be required to self-isolate at the end of the current university term in order to safely return home to be with their families at Christmas.

Speaking last month in the Commons, the Cabinet minister told MPs it is “essential” measures are put in place to ensure students can be with their loved ones during the festive period while “minimising the risk of transmission” of Covid-19.

The Department for Education said details on the return home would be set out “shortly”.

A spokeswoman added: “All students will be able to go home at Christmas if they so choose.

“However, if students are travelling home, we must ensure they do so in a way which minimises the risks of spreading the virus, and the date when universities must stop in-person teaching will be an important part of this.”