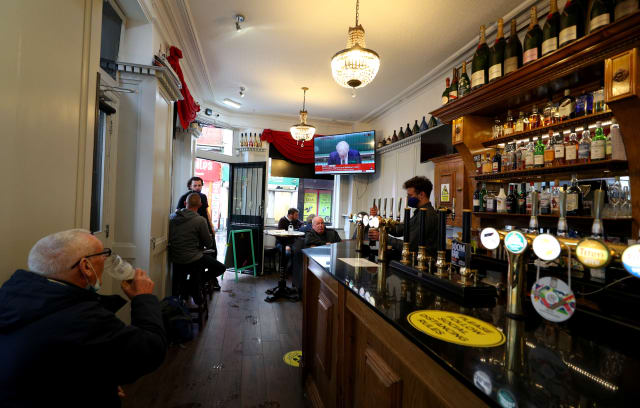 The British Beer & Pub Association (BBPA) said the Tier 2 Covid-19 measures – which ban households from mixing indoors – could lead to permanent closures in the sector.

It came as Health Secretary Matt Hancock announced that London, along with Essex, Elmbridge in Surrey, Barrow-in-Furness, York, North East Derbyshire, Erewash and Chesterfield will move into the second tier of restrictions from Saturday.

Some 3,640 pubs and 7,556 restaurants across London will be affected, according to analysis of official government data by real estate adviser Altus Group.

In a statement on Thursday, she said: “Tier 2 restrictions will decimate pubs, brewers and their supply chains in these regions unless a proper package of support is given to them.

“All pubs are already particularly struggling due to the current restrictions of the 10pm curfew, Rule of Six and low consumer confidence exacerbated by low footfall caused by a lack of tourists and commuters.

“Tier 2 measures mean pubs can remain open, but households cannot mix inside them.

“This completely kills our pubs’ business model, making many of them totally unviable, yet under Tier 2 restrictions they are not eligible for any additional financial support from Government, unlike in Tier 3 where additional support is provided.”

Brewers and pubs’ supply chain partners will also be affected, she added.

“Without additional financial support, specifically access to financial grants and a job retention scheme closer to that in Tier 3, many pubs will be closing their doors for good,” Ms McClarkin said.

The warning came as pub chain Marston’s said it is cutting around 2,150 jobs following a drop in trade.

The firm blamed recent nationwide measures to tackle a surge in coronavirus cases, which has seen curfews placed on hospitality venues, and the closures of sites not serving food in high-risk areas such as Liverpool.

Ms McClarkin said the Government “must now do the right thing” and announce financial support measures to pubs in the affected regions.

Robert Hayton, Altus Group’s head of UK property tax, said: “Further restrictive measures which adversely impact trade, already at far lower levels than before the pandemic, without any discerning targeted support, could be the death knell.”