Queen on first public engagement outside royal residence since March 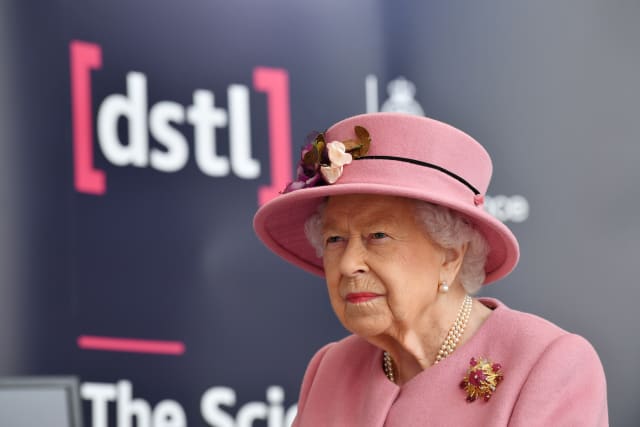 The Queen was back to business as she carried out her first public engagement outside of a royal residence since the coronavirus pandemic gripped the nation.

The 94-year-old monarch was joined by her grandson the Duke of Cambridge at the Defence Science and Technology Laboratory (Dstl) at Porton Down near Salisbury, meeting scientists providing vital support in the UK’s response to the Covid-19 outbreak.

She ventured from HMS Bubble – the nickname for her reduced household of staff – for what was her first external engagement in seven months.

The Queen was on good form as she quipped while signing the guest book: “Well it proves we’ve been here, doesn’t it?”

She was dressed in her trademark block colours – a Stewart Parvin old rose cashmere coat and silk dress of autumnal woodland florals with a matching Rachel Trevor Morgan hat – with black gloves and her signature black Launer handbag.

There was also the traditional royal duty – the unveiling of a plaque to officially open the Dstl’s new £30 million Energetics Analysis Centre, used by scientists for counter-terrorist work.

But much had changed in terms of the heightened safety arrangements put in place for the royal engagement.

Neither the monarch nor William was wearing a face covering.

But all 48 people who were due to come into close contact with them were tested for Covid-19 by Dstl beforehand, and all came back negative.

Kensington Palace declined to comment as to whether the duke was also required to have a test in order to be able to accompany his grandmother.

Second in line to the throne William and the Queen, who previously would have been side by side, walked two metres apart as they were greeted by staff.

The Queen also arrived by helicopter separately from the duke, who travelled by car.

Small groups of those taking part in the royal visit were arranged two metres apart for social distancing.

A Buckingham Palace spokeswoman said: “Specific advice has been sought from the medical household and relevant parties, and all necessary precautions taken, working closely with Dstl.”

The Salisbury engagement comes amid a resurgence of the virus, with the country battling a second wave and stricter restrictions in place in some areas.

The royal pair were also introduced to staff involved in the rapid response to the Novichok poisoning attack in Salisbury in 2018.

The Queen was last at an official public engagement outside of a royal residence when she joined the royal family for the Commonwealth Day service at Westminster Abbey on March 9.

The area of England where people are most worried about COVID