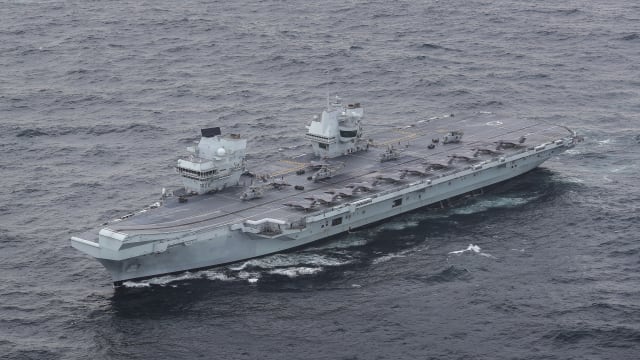 The Royal Navy’s aircraft carrier HMS Queen Elizabeth has returned to base after forming a carrier strike group for the first time for exercises in the North Sea.

Hundreds of families and well-wishers lined the harbour walls to welcome home the 65,000-tonne warship as it sailed into Portsmouth Naval Base, having taken part in the multinational GroupEx and Joint Warrior exercises.

During the sailing, the £3 billion warship was at the centre of the strike group which was made up of nine ships, 15 fighter jets, 11 helicopters and 3,000 personnel from the UK, US and the Netherlands.

The Royal Navy described the gathering as “the largest and most powerful European-led maritime force in almost 20 years”.

It included taking on board both UK and US F35B Lightning jets for the first time.

The ship’s departure from Portsmouth for the exercises was delayed after a small number of crew tested positive for Covid-19, and because of changing weather forecasts.

The Queen Elizabeth is expected to depart for its maiden operational deployment next year.

The carrier strike group included destroyers – the Royal Navy’s Type 45s HMS Diamond and HMS Defender and US Navy Arleigh Burke-class USS The Sullivans – as well as frigates HMS Northumberland and HMS Kent from the UK, and the Dutch Navy’s HNLMS Evertsen.

They are tasked with protecting the Queen Elizabeth-class carriers from enemy ships, submarines, aircraft and missiles, as well as carrying out a range of support missions, from maritime security to disaster relief.