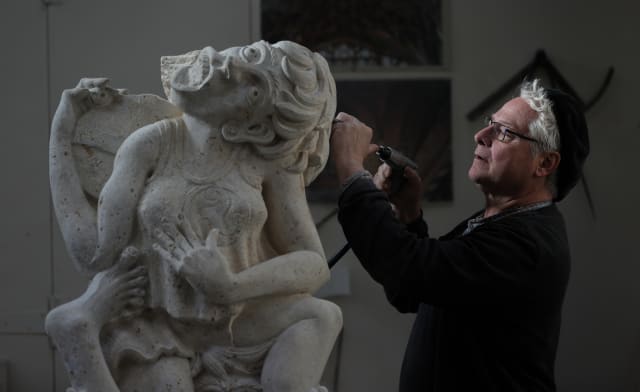 Work is under way to create a sculpture of a gargoyle depicting the famous annual cheese rolling competition.

The 3ft tall grotesque figure is due to be installed on the roof of Gloucester Cathedral as part of a £400,000 restoration scheme of the North Ambulatory.

The gargoyle will be the sixth and final sculpture installed at the 900-year-old Norman cathedral, with the others including a rugby player, a jockey and a suffragette.

The new gargoyles have been designed to represent Gloucestershire’s six districts.

The cheese-roller is the gargoyle for Tewkesbury, marking the death-defying races down Cooper’s Hill in Brockworth.

A rugby player with a broken nose and cauliflower ears is the Gloucester statue, while Cheltenham is represented by a tearful jockey grasping the Gold Cup.

The gargoyle inspired by suffragette Annie Kenney pays tribute to the forgotten women of the Stroud mills.

A freeminer was designed to represent the Forest of Dean and a sheep shearer for the Cotswolds.