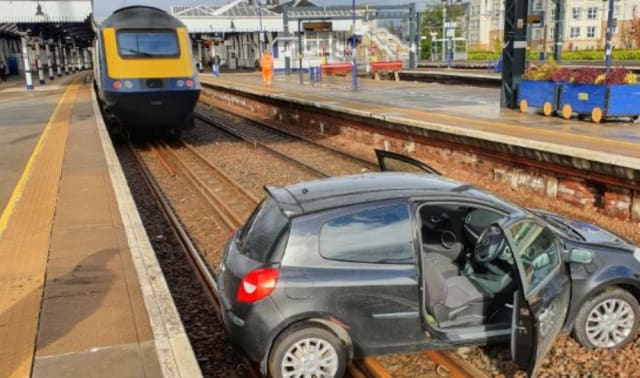 Two people have been taken to hospital after a car landed on train tracks at a railway station.

A Renault Clio was pictured on the line in Stirling on Wednesday afternoon.

It is believed the vehicle was in the station's car park beforehand.

Emergency services attended the scene shortly after 12.15pm and two people were taken to Forth Valley Royal Hospital in Larbert.

A Scottish Ambulance Service spokesman told the PA news agency: "We received a call today to attend an incident at Stirling train station.

"We dispatched an ambulance crew to the scene and transported two patients to Forth Valley Royal Hospital."

A British Transport Police spokesman also said: "Officers were called to Stirling railway station at 12.17pm this afternoon following reports of a car on the tracks.

"The car is believed to have ended up on the tracks from the station's car park.

"Officers are still determining how the car ended up on the tracks.

"Thankfully, those in the car have not been seriously injured."

Services for platforms two and three to Perth, Aberdeen, Glasgow and Edinburgh were affected by the incident.

Rail operator ScotRail tweeted advising anyone travelling at the station to head to other platforms.

It said: "A car has encroached on to the railway at Stirling. We're working closely with the emergency services.

"We're able to divert trains around this obstruction by using Platforms six and nine at the station.

"Use P6 if you're heading for Perth/Aberdeen and P9 for Glasgow/Edinburgh."

Later on Wednesday afternoon, Network Rail tweeted: "To allow the safe recovery of the vehicle, we need to switch off the overhead lines through Stirling around 1630.

"This will affect electric trains, but diesel trains will still be able to operate via Platform 6 and Platform 9."

In a separate incident, a car on the line at Fort William caused services to be delayed for around an hour between Glasgow Queen Street and Mallaig.