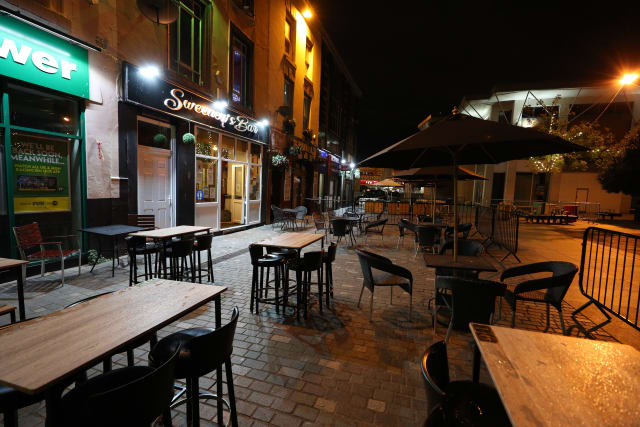 Boris Johnson is under increasing pressure to impose a national circuit-breaker lockdown, as officials discuss whether the severest local restrictions should be extended to new regions.

The Prime Minister’s new three-tier system of coronavirus restrictions for England came into effect on Wednesday, but the Liverpool region is the only area to be under the toughest rules.

Government health officials are expected to discuss with councillors in Greater Manchester and Lancashire whether to classify the areas as “very high”.

But Greater Manchester mayor Andy Burnham said that the Tier 3 restrictions are “fundamentally flawed” and “we won’t accept it”.

The row came as a model by scientists advising the Government suggested thousands of deaths could be prevented by a short national lockdown over half-term.

They argued that the coronavirus resurgence could be brought back under control by the so-called circuit-breaker that would buy ministers time to improve the test and trace system.

Labour leader Sir Keir Starmer heaped pressure onto the Prime Minister by publicly calling for a two- to three-week national lockdown over the October half term.

He said the measure, suggested by the Scientific Advisory Group for Emergencies (Sage) last month, was needed to prevent a “sleepwalk into a long and bleak winter”.

Downing Street is understood to be keeping the idea on the table, but initially went for a fresh range of less stringent measures to be imposed locally in Covid-19 hotspots.

Further pressure for the circuit-breaker came with a preliminary paper published by five members of the Scientific Pandemic Influenza Group on Behaviours, which advises Sage.

They suggested that a short, sharp lockdown across the nation would decrease cases, unload the burden on hospitals and prevent deaths by driving down the transmission rate, known as R.

Professor Matt Keeling, one of the authors, told BBC Radio 4’s Today programme: “The stricter the restrictions, the greater the impact.

“We stress that this is only a short-term measure – it buys us time to put other measures in place, but at the moment we do need that time.”

Labour’s shadow health secretary Jonathan Ashworth said: “This is important analysis and more evidence that a short circuit-break is needed to get control of the virus, fix test and trace and ultimately save lives.”

Wales’s First Minister Mark Drakeford told Sky News he is “very actively talking about and preparing for” a circuit-breaker for the nation.

Northern Ireland is also braced for a four-week shutdown of pubs and restaurants.

Scotland’s First Minister Nicola Sturgeon said England’s tiered system would “give an idea” of a similar scheme she is developing, which could come into effect when stricter measures are due to be eased on October 25.

In England, Sir Keir used a televised press conference to warn that Mr Johnson was “no longer following the scientific advice” by proposing “far less stringent restrictions” than suggested by Sage.

More than half (54%) of people surveyed by YouGov on Tuesday felt the Government should have introduced a national lockdown in September, while 28% of the 4,222 adults polled disagreed.

But the new measures opted for by the Prime Minister see all areas of England being put into different categories labelled as medium, high or very high risk.

The third tier, or very high, will see harsher restrictions including the closure of pubs unless they can operate as a restaurant.

Liverpool Mayor Joe Anderson said that crowds of people dancing in the city’s centre as the Tier 3 restrictions came into place “shame our city”.

Paul Brand, a councillor in Liverpool, said the city’s intensive care units are already more than 90% full with the city soon expected to reach levels of bed occupancy seen during the first wave of Covid-19.

– The UK recorded the highest daily death figure in four months, with a further 143 people dying within 28 days of testing positive for Covid-19 as of Tuesday.

– Tory MP Chris Green, who represents Bolton West, resigned as a ministerial aide over local restrictions, saying the “attempted cure is worse than the disease”.