Dancing crowds in Liverpool ‘a slap in the face’ for health workers, says mayor 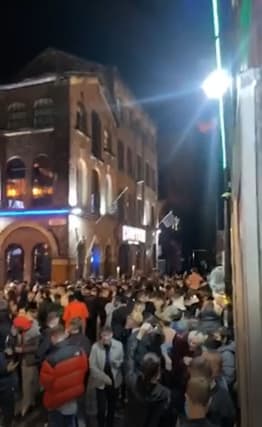 Crowds of people dancing in Liverpool city centre were a “slap in the face” for healthcare workers dealing with increasing pressure on hospitals, the mayor has said.

Joe Anderson and Merseyside Police Chief Constable Andy Cooke described videos showing a large crowd in the Concert Square area on Tuesday night as bringing shame on the city, which has seen a rapid rise in coronavirus infections.

Police dispersed the gathering at 10pm as bars shut their doors for the final time ahead of new Tier 3 measures, which came into force on Wednesday.

The scenes came as it was reported that intensive care capacity in the city’s hospitals was over 90% full, with Covid-19 patients making up an increasing proportion of patients.

Mr Anderson told the PA news agency the footage had sent him into “levels of despair” he had never experienced before.

He said: “I saw those people behaving in the way they did when over the last couple of days I have had messages from hospital workers who want to remain anonymous because they are concerned.

“The hospitals are so much under pressure, the staff feel physically and mentally exhausted.

“Yet I see people putting two fingers up to those health workers and the people who have had members of their family die.

“It really was a slap in the face.”

Footage on social media showed large numbers of young people dancing in the street outside bars, and in one video a police car could be seen driving through a crowd while revellers banged on the side of the vehicle.

He said: “The actions we saw last night were selfish, dangerous, childish and brought shame on to our city.

“We have all got to come together. It is about looking after the most vulnerable and the actions of those last night didn’t reflect that at all.”

He said the “vast majority” of people in Merseyside were abiding by the rules but those who were “blatantly disregarding the law” were putting extra pressure on the force.

Mr Cooke said those gathered in Concert Square were quickly moved on by officers and there were no significant incidents in other parts of the city, although 38 fines were issued on Tuesday evening for breaches of Covid legislation.

Tier 3 measures were brought in for Liverpool and five neighbouring boroughs on Wednesday, and have seen the closure of bars, pubs that do not serve meals, gyms, betting shops and casinos.

But Mr Anderson, who previously called for a circuit-breaker lockdown, questioned whether the measures would be enough to tackle the “uncontrollable” spread of the virus.

He said: “This city is in a Covid crisis. It’s an enemy we are really finding it hard to get on top of and defeat. We need to keep working together and pulling together.

“Do I think at this juncture what we’ve got in place is going to be enough to bring it down rapidly? I’m not so sure.

“Do I think we could bring the R rate back to a level that is manageable in a month? It is going to be difficult but that’s what we’ve got to do and we have got to work together with people co-operating.”

Work and Pensions Secretary Therese Coffey told Times Radio she was “saddened” by the pictures of crowds in the city centre.

She said: “I grew up in Liverpool. I know it is a great city. But frankly it is irresponsible behaviour.”