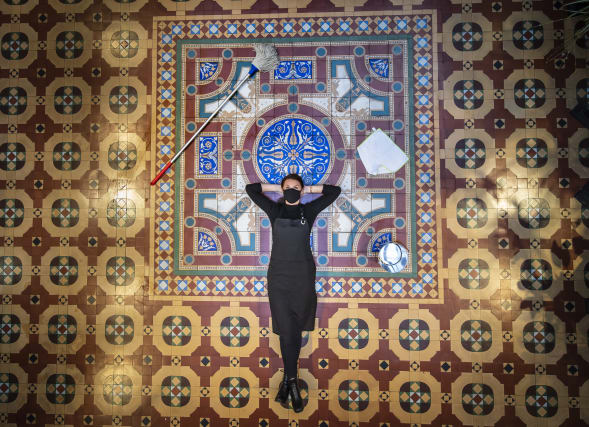 Visitors to England’s oldest living convent are being invited to follow in the footsteps of residents from the last 150 years and enjoy a historic space decorated with rare 19th century floor tiles.

The floor in the Winter Garden at the Bar Convent, in York, is one of only two surviving examples from tile makers George and Arthur Maw and was created in 1867.

It was made for the religious order of sisters living in the Grade 1-listed convent at the time, and now forms part of the cafe in the Bar Convent Heritage Centre.

The space – which was originally an outdoor yard but is now covered by a cast iron beamed roof – also features the designs of railway architect GT Andrews.

A spokeswoman for the Bar Convent said members of the public visiting the Winter Garden in the coming weeks could experience how it was originally used by sisters.

She said: “The Winter Garden is the ideal setting, now that the colder weather and autumnal light is coming, for people to enjoy some autumnal activities and warming homemade food, just like the sisters would have done 150 years ago.”

Sister Ann Stafford, convent superior, said: “We are incredibly lucky to have such a beautiful space in the Bar Convent.

“GT Andrews and the Maw brothers were renowned craftsmen and we are thrilled to still be able to celebrate the legacy of these historically significant figures and popular architecture and design of the mid-19 century.

“The Winter Garden has offered a peaceful sanctuary to the sisters that have lived here over the years, it remains so for the sisters that still live here today and for all those who visit us here at the Bar Convent Heritage Centre.”

A living convent is defined as one with a continuously resident religious community, and the Bar Convent was established in 1686.

It features an 18th century chapel, an exhibition, a guest house, a cafe, a gift shop, a garden and meeting rooms.