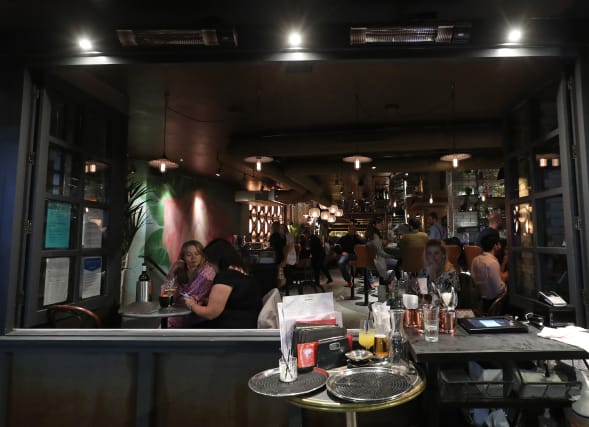 Matt Hancock has suggested the 10pm hospitality curfew was a “matter of policy choice” in order to keep schools and workplaces open.

The Health Secretary told MPs there is “direct and approximate evidence” for the positive impact of the limits on pubs and restaurants, citing a fall in alcohol-related A&E admissions late at night.

But Mr Hancock insisted the Government’s desire to protect education and work “as much as is possible” meant they had to take measures against socialising to try to slow the spread of Covid-19 transmission.

MPs were also warned they should have “no confidence” of ever reaching herd immunity against the virus even if everyone caught it.

Appearing in the Commons to move regulations to implement England’s new three tiers of restrictions, Mr Hancock was challenged by Tory MP Huw Merriman (Bexhill and Battle) on whether the scientific evidence on curfews shows the positives outweigh the negatives.

Mr Hancock replied: “We already now have evidence from accident and emergency departments that we’ve seen a reduction in alcohol-related admissions late at night after the 10pm curfew.

The Health Secretary said people are largely mixing outside after 10pm, adding: “They would otherwise be mixing inside the premises – it’s just easier to photograph outside.”

“And so it is therefore understandable that governments around the world and around this United Kingdom, governments of all different political persuasions, have all come to broadly the same conclusion that it is necessary to restrict socialising because that way we reduce the transmission with the least damage to education and the economy.

“So while there is both direct and approximate evidence for the positive impact of this measure, there is also the strategic point which is, if we want to control the virus and we weren’t to do this, we’d have to do something else and we want, as a matter of policy choice, to protect education and protect work.”

“First, it says that if enough people get Covid, we will reach herd immunity. This is not true.

“Herd immunity is a flawed goal without a vaccine, even if we could get to it, which we can’t. The second central claim is that we can segregate the old and the vulnerable on our way to herd immunity. This is simply not possible.”

He also dismissed suggestions that elderly and vulnerable people should be segregated while other parts of society are opened up.

The Health Secretary said: “We are not the kind of country that abandons our vulnerable or just locks them up.”

He noted: “My argument to the Secretary of State is can he look not just in high-risk areas, but in all areas, to get more of the contact tracing done by our fantastic directors of public health and their teams?”