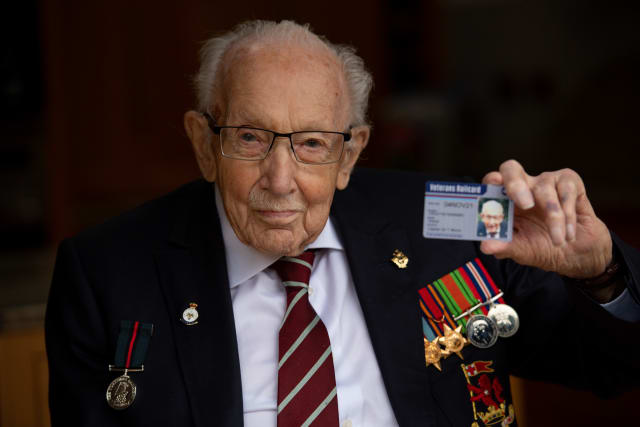 Captain Sir Tom Moore was presented with the very first new veterans railcard, which will see military veterans of every generation benefit from discounted travel.

An estimated 830,000 veterans who are not eligible for existing railcards will be able to get up to a third off all rail fares from November 5, as well as discounted travel for adult companions and children.

At his home in Bedfordshire, Sir Tom, who served in the Second World War, was presented with the very first card by Transport Secretary Grant Shapps.

He won the nation’s heart after his incredible fundraising efforts this year, raising almost £33 million for the NHS by walking 100 laps of his garden before his 100th birthday in April.

Sir Tom said: “This is a wonderful occasion to accept the first veterans railcard.

“It is a rare opportunity to show thanks and gratitude to veterans and this railcard is a necessary recognition and investment in veterans, giving them the ability to re-connect and combat loneliness, something that we promote and support at The Captain Tom Foundation.”

The new railcard is part of the Government’s veterans strategy, which aims to provide support in areas such as relationships, employment, health, finance and housing, for people who have served in the military.

Mr Shapps said: “We have an eternal debt of honour to those who have served our country, and this railcard is part of marking our gratitude.

“For veterans looking to re-enter the world of work and connect with friends and family, it will cut the cost of travel to open up new opportunities.”

He added: “I am also delighted to present Captain Sir Tom Moore with the very first railcard.

“Through his service and his inspirational fundraising, he has shown the selflessness and indomitable spirit of all those who have served.”

Charles Byrne, director general of The Royal British Legion, said: “At a time when many veterans are facing significant financial hardship, we hope as many as possible will be able to enjoy the benefits this card will bring when travelling by train.”

The new railcard will cost £21 for an introductory period until March 31, before the price is increased to £30.