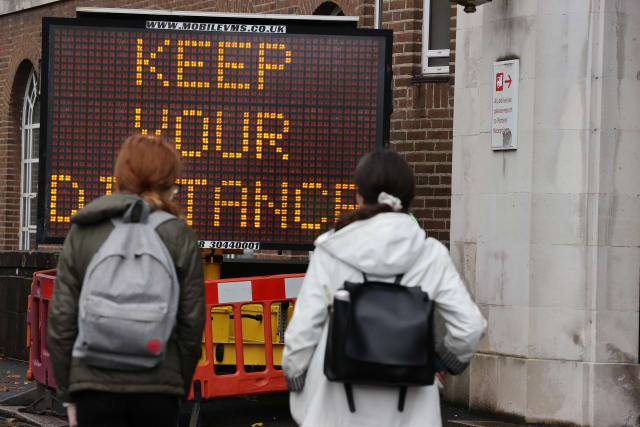 A member of the expert panel of scientists advising ministers through the coronavirus pandemic said a “circuit break” lockdown would have prevented the need for “intensive and long-term” restrictions later.

At its September 21 meeting, the Scientific Advisory Group for Emergencies (Sage) suggested immediately introducing a national lockdown lasting between two and three weeks to halt the rapid spread of the virus – dubbed a “circuit break” lockdown.

But the Prime Minister appeared to reject the idea when he laid out a tiered system of restrictions on Monday, placing only Liverpool City Region into the harshest measures of Tier 3, which includes the widespread closure of the hospitality sector and banning social interactions between households.

Andrew Hayward, professor of infectious disease epidemiology at University College London and a member of Sage, said he did not think the restrictions included in Tier 3 would result in the R rate being pushed below one, meaning the virus was likely to still spread at pace.

Speaking to BBC Radio 4’s Today programme, Prof Hayward said that the failure to “take decisive action several weeks ago” meant it was “not really surprising that we’re continuing to see large increases in cases”.

He added: “I think it is clear even at the so-called ‘very high’ levels of restrictions that they will not be sufficient to reduce R below one.”

Prof Hayward, who did not attend the September 21 meeting, argued that a “circuit break” style lockdown would have been a “proportionate” way of getting a grip on the virus while avoiding “intensive and long-term lockdowns later”.

He told Today: “What we’ve done through the pandemic is we’ve invested huge amounts of money in being able to track where the virus is and where it is increasing so we have much better information to pick up early warnings of increases in cases.

“That should allow us to act early in a decisive way to prevent having to act in a more damaging way later.

“And that was really one of the intentions of the recommendations for a ‘circuit break’, that this could be a controlled, manageable, proportionate system that would save the need for much more intensive and long-term lockdowns later.”

In a sign Tory thinking on a national lockdown could be changing, Sir Bernard Jenkin, chairman of the Liaison Committee, which scrutinises the Prime Minister, told Times Radio he thought it was better to go for a “short, sharp, shock” lockdown in order to reach “manageable levels before Christmas”.

Labour shadow health secretary Jonathan Ashworth, meanwhile, said he would have been inclined to have “followed the science” if he was in power.

He also said ministers should have closed more pubs and bars than they did on Monday in a bid to stem transmission.

“If we need to impose further restrictions to get on top of this virus, then I’m afraid we have to do that,” he told Today.

“It is why I support the decision that was taken yesterday to close pubs and bars in Merseyside.

“I think actually the Government should have gone further yesterday because we’ve got to reduce social mixing given where we are with the prevalence of the virus in parts of the country.”

Asked what he would have liked to have seen from ministers, Mr Ashworth replied that he “would have looked at closing pubs and bars in other parts of the country” as well as devolving Test and Trace entirely to local authorities.