What are the new three-tier Covid restrictions? 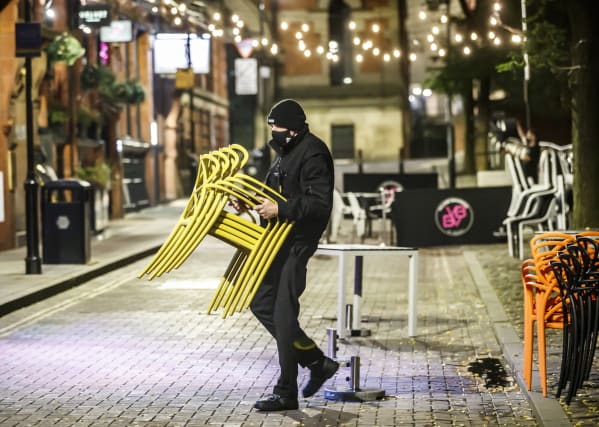 A new three-tier strategy of local lockdown measures for England has been announced by Boris Johnson in efforts to curb rising Covid-19 rates.

The Prime Minister told the Commons on Monday that this will “simplify and standardise” local lockdown rules.

– What is the new system?

Different areas of England will be split up into medium, high and very high alert levels.

– Will areas classed as medium see any changes?

These areas will be subject to the same national measures which currently apply across the country.

– What about those in the high alert level?

Household mixing is banned indoors, although support bubbles will still be permitted, while the rule of six will continue to apply outdoors.

Most areas which are already subject to local restrictions will move to this level, according to the Prime Minister.

Nottinghamshire, East and West Cheshire and a small area of High Peak will also move into the high alert level, he added.

– And the very high alert level?

Social mixing will be banned both indoors and in private gardens, while pubs and bars will be told to close unless they can operate as a restaurant.

Local leaders will help to determine whether other venues should be closed, such as gyms or casinos, in very high alert level areas.

People will also be advised against travel in and out of the areas.

– Which areas have been placed in Tier 3?

The Liverpool City Region faces the toughest local lockdown restrictions and will move into the very high alert level from Wednesday, the Prime Minister told the Commons.

He added that local authorities in the area had agreed that gyms, leisure centres, betting shops, adult gaming centres and casinos will also close.

– What about in Greater Manchester?

Greater Manchester has avoided being placed under the harshest lockdown measures, according to local MPs and the region’s mayor.

MPs were briefed by Health Secretary Matt Hancock on Monday that the 10 boroughs would be placed under high alert level restrictions, meaning they will operate under measures similar to those in place now.

Pubs serving food will be permitted to stay open, but households will be banned from mixing indoors.

MPs will debate and vote on the measures on Tuesday and the new tiered system will come into effect on Wednesday.

Measures are to be kept under review, with a four-week sunset clause for areas facing the toughest restrictions.