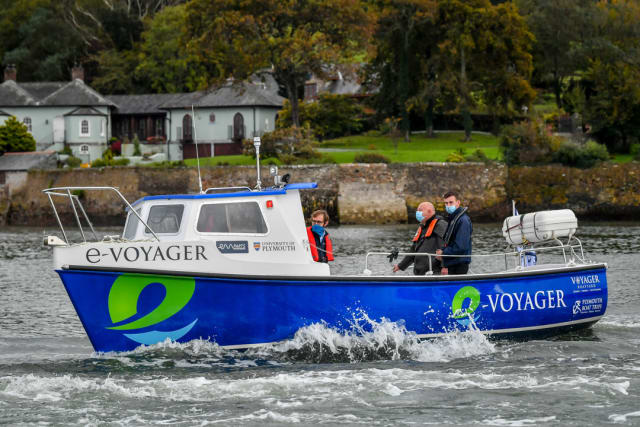 Britain’s first sea-going electric ferry has taken to the water ahead of rigorous trials before it carries passengers next year.

The boat, named e-Voyager, uses repurposed Nissan Leaf batteries instead of a traditional diesel engine – a process that could be used in other commercial vessels under 24 metres long.

It was launched on Monday afternoon and will now undergo running trials before carrying 12 passengers at a time on Plymouth Boat Trips’ ferry routes from April.

Plymouth City Council will install three chargers on the Barbican landing stage, where the boat will take under three hours to achieve a full charge.

The vessel will be charged overnight when berthing, providing enough power to run for a full day and complete its journey on a single charge.

If required, the boat can plug in and recharge between runs as passengers embark.

Both the council and local ferry companies are working to develop a charging infrastructure for marine transport in the city.

The boat is a collaboration between Plymouth Boat Trips, Voyager Marine, the universities of Plymouth and Exeter, Teignbridge Propellers, and EV Parts.

It has been funded through the £1.4 million clean maritime call, a Maritime Research and Innovation UK initiative supported by the Department for Transport to support the UK’s goal of zero-emission shipping.

In a statement, Transport Secretary Grant Shapps described e-Voyager as a “trailblazing project”.

“This is one of the first steps in what will be a long journey towards zero-emission shipping,” Mr Shapps said.

“We have already said that it is our goal that new ships ordered from 2025 must have zero-emission technologies if they are to be used on British waters.

“Cleaner waters are essential if we are to protect our marine environment.”

Andy Hurley, project leader for Plymouth Boat Trips and Voyager Marine, said the launch of the boat was “hugely exciting”.

“Through developing the technology and maritime applications, Voyager Marine is helping to place Plymouth and the South West as UK leaders in the conversion and new build of zero-carbon, fully electric commercial vessels,” he said.