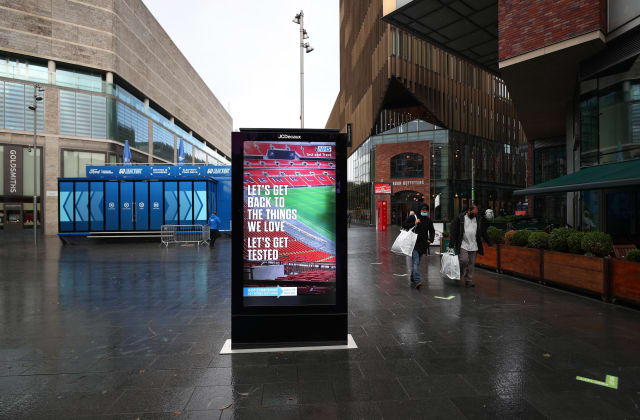 Further support is needed to reduce the “massive” economic impact new lockdown measures will have on the Liverpool City Region, its metro mayor has warned.

Pubs and bars in the Liverpool City Region will be required to close from Wednesday as the Government announced it was being placed onto the most serious Covid-19 alert level.

The restrictions will also see wedding receptions banned, and the closure of gyms, sports facilities, betting shops and casinos.

It comes as the Government said about 40% of all coronavirus cases in England were in the north-west of the country.

“They can’t pay two-thirds of their gas or electricity, or when they go to a shop, they can’t say ‘can you cut that by a third’.

“We need the Government to work with us so we can provide a package of support that, one, secures the likelihood that our businesses can come out of this at the other end.

“Two, it ensures that people stay in jobs, and three, that our overall economy is not severely impacted post-pandemic by the measures taken by Government today.”

Under the expansion of the job support scheme, the Government will  pay 67% of a worker’s salary, up to £2,100 per month, if a business is forced to close under local lockdown restrictions.

Mr Rotheram said, while the severity of the new lockdown measures were “comparable” to the national restrictions in March, the support now being offered was not “anywhere near” what had been provided earlier in the year.

Mr Rotheram added: “If it was right then, it has to be right now.”

While pubs and bars will be required to close in the Liverpool City Region, the Government said they can remain open if they operate as a restaurant.

Prime Minister Boris Johnson said the new restrictions “will be critical to save lives and protect the NHS”.

He said: “This is a vital moment in our national effort against the second wave of the virus.

“We will continue to work closely with other local leaders in the days ahead.”

In a joint statement, Mr Rotheram, city mayor Joe Anderson and the leaders of Liverpool City Region’s six local authorities said they “welcome the opportunity” to get support from the armed forces.

They said in a statement: “To assist with efforts to bring the number of cases down, we have gained agreement from government for new, local arrangements and funding support for more localised test, trace and isolate and also enforcement, specifically:

“An enforcement package, with laws, not just guidance and advice, and funding and resources to enforce restrictions where necessary.

“An effective local Track, Trace and Isolate package with the funding to support it, cooperation on data, local control and the guaranteed supplies and resources required.

“We also welcome the opportunity to engage logistics and capacity support from the Armed Forces, working alongside our own Local Authority staff and Public Health officials.”

Public-sector workers will not have ‘Tory pay freeze’ in Scotland, says Forbes