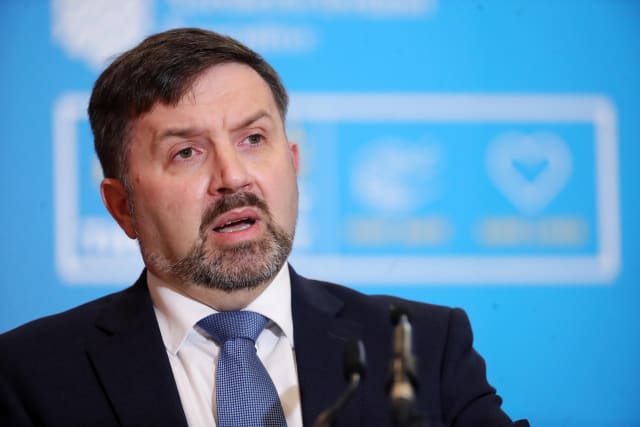 It is understood chief medical officer Dr Michael McBride and chief scientific adviser Professor Ian Young have recommended the introduction of a region-wide lockdown lasting for between four to six weeks.

It is further understood the officials have urged school closures for a period within the lockdown, though not necessarily for the entirety of it.

They have said action needs to be taken within days and have identified the six-week lockdown as providing the best chance of Northern Ireland reaching Christmas without the need for another one.

Health minister Robin Swann confirmed a paper outlining the officials’ advice had been presented to First Minister Arlene Foster and deputy First Minister Michelle O’Neill on Sunday, but he declined to elaborate on the details.

“That paper recommends decisive action be urgently taken to save lives, prevent the health service being overwhelmed and protect non-Covid services to the greatest extent possible,” Mr Swann told the Assembly in Belfast.

The weekly meeting of the Stormont executive, which was scheduled for Thursday, is now expected to be brought forward to Tuesday, an indication that decisions on fresh restrictions are imminent.

Mrs Foster and Ms O’Neill have both said that the executive will need to make significant decisions in the coming days.

On Monday, Mrs Foster was maintaining her position that another lockdown was “not inevitable”.

Three further deaths and another 877 positive cases of Covid-19 were reported by Stormont’s Department of Health on Monday.

The latest deaths brought the toll recorded by the department to 591.

Almost a third of all confirmed cases since the pandemic began, 6,161 of 21,035, have been reported in the last seven days.

Notwithstanding there was a less extensive testing regime during the height of the pandemic, the soaring figures are causing significant alarm among health officials.

In the Derry and Strabane Council area, which is currently subject to additional localised restrictions, the rate has risen to 971 per 100,000.

On Monday, there were 140 patients in hospitals with Covid-19, including 22 in intensive care.

Mr Swann told the Assembly that all main markers of the disease’s spread had doubled in seven days.

The suggestion of a six week, Northern Ireland-wide lockdown was questioned by a senior DUP MP.

Sir Jeffrey Donaldson queried why such a move would be required across the region, given the marked variations in infection rates in different areas.

Sir Jeffrey’s advocacy for maintaining a localised approach is at odds with Sinn Fein’s position, with the party having signalled support for a move to region-wide measures.

Sinn Fein has not yet made clear whether it favours the concept of a six-week lockdown.

Sir Jeffrey said a six-week lockdown would be more radical than anything currently being considered elsewhere in the UK and in the Irish Republic.

“A six-week full lockdown, back to where we were last March, would, I think, take us way, way ahead of anywhere else,” he told BBC Radio Ulster’s Nolan Show.

“I’d be wanting to know why we’re abandoning the policy of focusing in on the areas where the infection rates are highest.”

The DUP’s Westminster leader also challenged Mr Swann on why Covid-19 contingency measures, such as the reopening of a Nightingale hospital at Belfast City Hospital, had not been rolled out, if the situation facing the local health service was so grave.

Later in the Assembly, Mr Swann highlighted the numbers of medics that would need to be taken away from other services to staff the Nightingale facility.

“I think it is critical that we ensure that schools remain open because it will do long-term damage to the life prospects of our children,” he told BBC Radio Ulster.

While the Derry and Strabane Council area currently is seeing 971 cases per 100,000 people, in places like Mid and East Antrim the rate is significantly lower, at 87 per 100,000.

On Sunday, Sinn Fein MP Chris Hazzard suggested it was time to move away from localised measures.

“I think there was a logic and a sense behind local lockdowns at a time but I think we’re now moving fast into the area where we need to be looking at more general lockdowns once again, at more general and rigorous and robust methods at being able to suppress this virus,” he told BBC One NI’s Sunday Politics programme.

Simon Hamilton, chief executive of Belfast Chamber of Trade, warned a second lockdown could kill off many businesses.

“Until a vaccine is available, it is clear that, whatever measures the executive introduce, they won’t kill off the virus but the inadvertent effect of their decisions in coming days could be to kill off many, many businesses and lots and lots of jobs with them, affecting thousands upon thousands of families all across the region,” he said.