Drinkers fear Liverpool will return to the 1980s with new restrictions 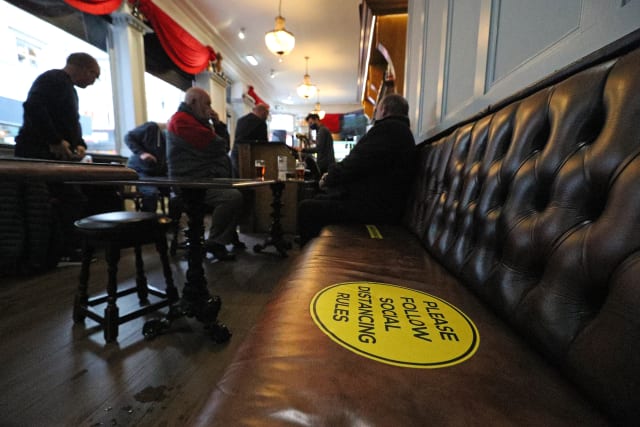 Drinkers in Liverpool have said they fear the city will head back to the economic levels of the 1980s, as strict coronavirus restrictions were announced.

Following the announcement on Monday that the six boroughs which make up the city region would face Tier 3 measures, including the closure of pubs, customers in The Midland on Ranelagh Street accused the Prime Minister of southern bias.

Marty Hand, 60, who was enjoying a pint of lager with a friend, said: “The whole economy is going to suffer because of it and I think Boris Johnson has been totally against the North West area.

“Everyone in Liverpool is hurt and we feel like scapegoats. This is going back to the 1980s.”

His companion, who did not want to be named, added: “It’s a load of crap.”

Michael White, 70, said students should not have been allowed to return to the city.

He added: “The furlough pay now is two thirds, if this was happening in London it wouldn’t be.

Another customer who did not want to give his name said: “I’m not going to comply with it, I don’t believe a word of it.”

James Monaghan, 58, licensee of the Vernon Arms in Dale Street, said his business has not been viable since the 10pm curfew came in.

He told the PA news agency: “We  haven’t been at all treated fairly.”

He said the pub, which used to be the favourite haunt of militant councillor Derek Hatton, reduced capacity and put in measures including table service, hand sanitiser and a one-way system after the first lockdown.

Mr Monaghan added: “This sort of breaks your heart a bit because we have done everything right.”

Emyr Barton, general manager of The Railway Tavern on Tithebarn Street in the city centre, said: “There is anger, and I think it’s not even anger at the situation, not at the fact we’re being locked down, I understand that, but I think the first lockdown was an opportunity to get all of this in place so we could live safely alongside this virus, and now this is happening.”

Chef patron and owner of The Art School Restaurant, Paul Askew, said a £40 million fund set up by local government in the Liverpool city region would help many businesses, but said a loss of a quarter of the city’s hospitality industry could be a “conservative estimate”.

The co-chairman of the Liverpool Hospitality Association said: “A lot of people I know are feeling like giving the keys back.

“You feel like you’re just rolling with the punches, every day seems to have another challenge.”

Although restaurants will stay open, Mr Askew said customer confidence would be affected.

He added: “We have only just built that back up and we need to send a very clear message to our guests, potential shoppers and restaurant-goers that it is safe.”