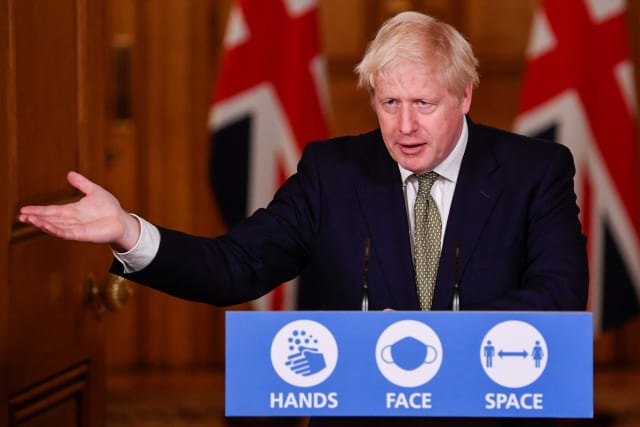 The Prime Minister has defended restrictions imposed on the hospitality sector, stating that similar measures have been introduced elsewhere in Europe.

Boris Johnson said on Monday that the UK Government was not an “outlier” in its decision to limit people’s time in bars and pubs to curb the spread of coronavirus.

It comes as the British Beer and Pub Association (BBPA) said further lockdown restrictions targeting the industry “will” lead to permanent closures and job losses.

Under the Government’s new tier system for local lockdowns, areas that are placed in the “very high” alert level will see bars and pubs close, along with a ban on social mixing indoors.

Speaking about restrictions on pubs Mr Johnson told a Downing Street press conference: “We are not an outlier in this, in the sense that I think they’ve closed the bars in Paris, and in Berlin they’ve got the first curfew since 1949, so across Europe and elsewhere you can see people tackling this in very similar ways.”

The new local lockdown measures will be applied to the Liverpool City Region on Wednesday, resulting in the closure of its bars and pubs, unless they serve food and alcohol as part of a sit-down meal.

The BBPA said there were about 970 pubs in the areas affected by the lockdown.

“It’s why we are calling for a proportionate response to the virus based on tangible transmission evidence.

“Where is the merit in closing pubs to combat the virus based on that information?

“Especially when they are providing a safe and regulated place for people to meet at.”

She said the restrictions would “devastate” the sector, claiming that “thousands” of local pubs and jobs “will be lost for good”.

Meanwhile, leaders in the night-time economy have launched a legal challenge over the impending lockdown rules.

Night-time economy adviser for Greater Manchester Sacha Lord said lawyers have been instructed to seek a judicial review into any further restrictions on hospitality and entertainment venues across the North of England.

Trade body The Night Time Industries Association (NTIA) said the measures have “no scientific rationale” and could have a “catastrophic impact” on late-night businesses.

Mr Lord, co-creator of the Parklife festival and The Warehouse Project, who is leading the legal action, said leaders in Greater Manchester have not seen “any tangible scientific evidence to merit a full closure” of venues in the area.

“Despite discussions and ongoing calls for data, we have not yet been shown any tangible scientific evidence to merit a full closure of the hospitality and entertainment sectors across Greater Manchester,” he said.

“We have therefore been left with little choice but to escalate the matter further.”

On Monday, Culture Secretary Oliver Dowden made clear that the Government will resist any legal challenge to closures of pubs and restaurants.

“I think they will find that if they challenge the Government we do have robust evidence for doing this,” he told Sky News.

“The evidence shows that there is a higher risk of transmissions in hospitality settings.

“There is academic evidence from the United States.”