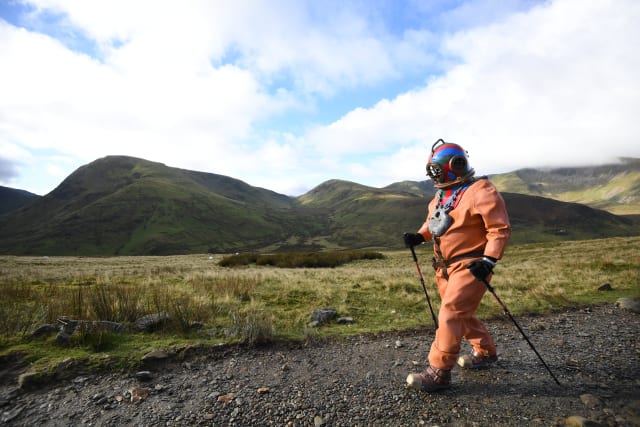 A veteran fundraiser has reached the final stage in his attempt to climb the Three Peaks wearing a 130lb deep sea diving suit.

Lloyd Scott, who is best known for his world record of taking the longest recorded time to complete a marathon, has reached Mount Snowdon, after summiting Ben Nevis and Scafell Pike in the 58.9kg diving suit.

Mr Scott completed the ascent of Scafell Pike on Thursday, after reaching the peak of Scotland’s highest mountain on Monday.

The challenge has so far raised more than £46,000 in aid of The Lord’s Taverners, a youth cricket and disability sports charity.

Tweeting about the challenge, Mr Scott said he aims to finish the feat on Monday afternoon.

“The final ascent at Snowdon starts on Sunday morning and after a night camping on the mountain, I will finish on Monday early afternoon – with a bit of luck,” he wrote.

Tackling Ben Nevis, Scafell Pike and Mount Snowdon will be the 58-year-old’s final charity challenge, having raised more than £5 million across 30 years for charitable causes.

Mr Scott’s first charity challenge was the 1987 London Marathon, which he completed after being diagnosed with leukaemia.

He has since completed an Everest marathon, an underwater marathon, and cycled a Penny Farthing across Australia.

To see donations to The Lord’s Taverners, visit: www.donate.giveasyoulive.com/fundraising/lloydscotts3peakschallenge