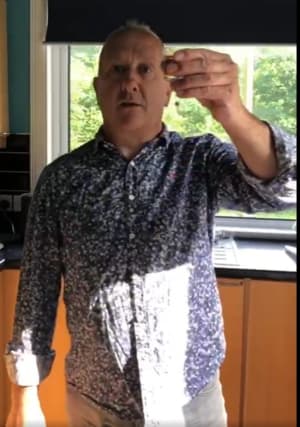 A Gaelic version of a classic french dessert inspired the winning dish at this year’s World Porridge Making Championships.

Chris Young from Crieff, Perthshire, took the top spot with Crunch sa Bheul (Gaelic for crunch in the mouth) – a Scottish take on croquembouche, made with oatflour, sugar and butter, piped with cream and dipped in caramel.

Usually held in Carrbridge in the Highlands, the championships moved online this year in response to the coronavirus pandemic.

Contestants were asked to submit a video entry of them preparing their porridge and entries were received from Lithuania, Spain, Scotland, England, Canada and Germany.

The judging panel marked the videos on five criteria including virtual taste (whether they wanted to taste the dish), appearance, execution, originality and flair.

The 10 winners were announced throughout World Porridge Day on Saturday on the Golden Spurtle website and Facebook page.

Mr Young – the owner of Perthshire Oatcakes – was Speciality Porridge Champion at the 2018 event.

Oatmeal-inspired duck confit taco, porridge pina colada and blueberry cheesecake porridge were among other recipes in the top 10.

Charlie Miller from Carrbridge Community Council, which organises the competition, said: “While we were of course hugely disappointed not to be able to host the World Championships in Carrbridge this year, we’ve been delighted with the response to the Virtual Spurtle.

“Many thanks to everyone who entered, congratulations to our top 10 finalists, to our winner and runner up, to our judges, and to everyone who has watched the videos online today. We look forward to welcoming everyone back to Carrbridge next October for the 2021 championships.”