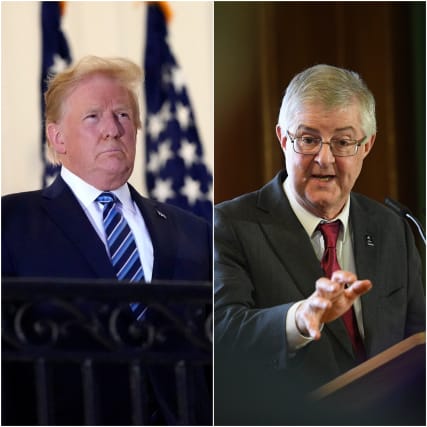 The First Minister of Wales has responded after US President Donald Trump retweeted criticism of plans for rolling lockdowns in the country this winter.

Fox News presenter Laura Ingraham tweeted “Your future under Biden: ‘Rolling lockdowns’ will become norm in Wales” along with a link to a BBC News article on October 7.

In the article, Wales’s chief medical officer Dr Frank Atherton was quoted as saying that rolling lockdowns could take place in the country over the winter to control the spread of Covid-19.

“I think the tweet that the president retweeted said that if Joe Biden were to be elected, then the United States could look like Wales,” Mr Drakeford replied.

“So I think many people will have read that tweet and be thinking to themselves, ‘If only that could be true’.”

Dr Atherton previously told BBC Radio Wales that the country could be “going in and out” of lockdown restrictions over the next few months.

Currently, more than 2.3 million people in Wales are subjected to local lockdown rules.

Under the regulations, they must not enter, leave or remain away from an affected area without a reasonable excuse such as work or education.

Indoor meetings with people from different households are banned, with extended households suspended.

People must also work from home where possible.