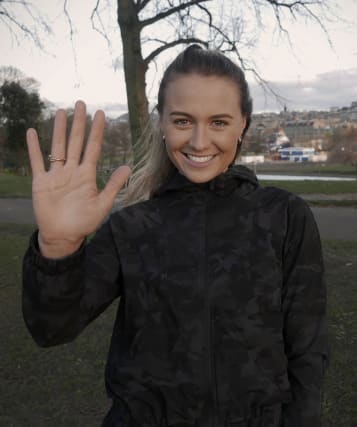 A runner whose lockdown 5k challenge raised more than £5 million for NHS charities has been honoured by the Queen.

Olivia Strong, from Edinburgh, created the Run for Heroes 5km Challenge which inspired a million people to run five kilometres, donate £5 and nominate five friends to do the same.

The 27-year-old has been made an MBE in the Queen’s Birthday Honours for services to fundraising during the pandemic.

She said it was “really special” to be given the honour, and added it is for all 1.5 million people inspired to take part in the challenge and her family and friends who helped set up the campaign.

She told the PA news agency: “There are not many words to describe it – to be honest it feels really special to be recognised for something that was such a joy to be part of but also at the same time felt so right.

“The MBE is not for me – it’s a Run for Heroes MBE. It’s for the 1.5 million people who went out and also for the team I’ve been working with – India, Alice and my family.

“It’s an award on behalf of everybody. I very strongly feel it’s not something achieved by myself in any way.”

The freelance documentary producer came up with the idea for the challenge during a run on Arthur’s Seat in Edinburgh while in lockdown.

She said: “I noticed how many people were also running and I thought – why don’t we pay to do our daily form of exercise?

“5k was within the guidelines and I thought £5 was not too much money to ask people.”

She now hopes to make the challenge a yearly event taking place in May and raising money for charities across the UK.

Prime Minister Boris Johnson earlier awarded her a Points of Light Award, a scheme launched in 2014 to recognise outstanding individuals making a difference where they live.