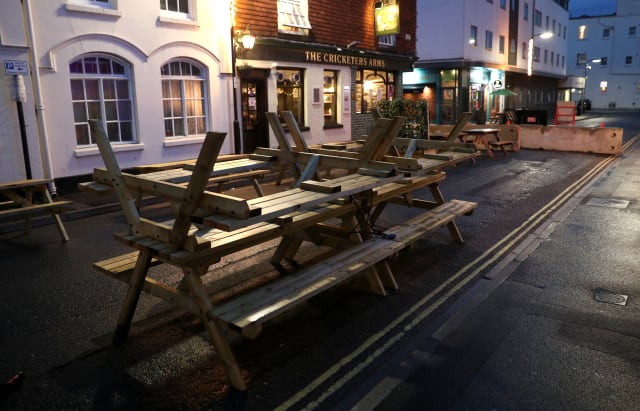 The proportion of adults leaving home to socialise or dine out has fallen in recent weeks as local restrictions and fears for the winter continue, official figures show.

Just under half (43%) of adults reported meeting with others less often, when asked about changes to socialising outside their household, the Office for National Statistics (ONS) said.

A quarter of adults said they had eaten or drank in a restaurant, pub or bar during the previous week when polled by the ONS between September 30 and October 4.

Three weeks earlier, 30% of respondents said they had done so in the past seven days.

The proportion of adults leaving their home to meet others in either a public place or a personal place, such as another person’s home, has fallen eight percentage points over the same period.

This has now dropped to 20% for both activities.

The ONS analysed responses from 1,573 adults about their feelings and activity during the past week in its Opinions and Lifestyle Survey examining the social impact of coronavirus.

It also found that average anxiety scores for all adults have increased to 4.3, the highest since April 3 to 13, when the average score reached 4.9.

And 36% of adults reported high anxiety levels, the highest proportion since the height of lockdown, when 37% said so during April 17 to 27.

Overall, 27% of adults said they had not socialised with anyone outside their household in the past seven days, compared to 25% last week.

Levels of socialising varied by whether someone said they were in an area subject to local lockdown restrictions.

A third (34%) of those in these areas said they had not socialised with anyone outside their household, compared with 25% for those not in local lockdown areas.

Seven per cent of people in a local lockdown area said they had socialised in a group with six or more people, rising to 9% of those not in an area subject to restrictions.