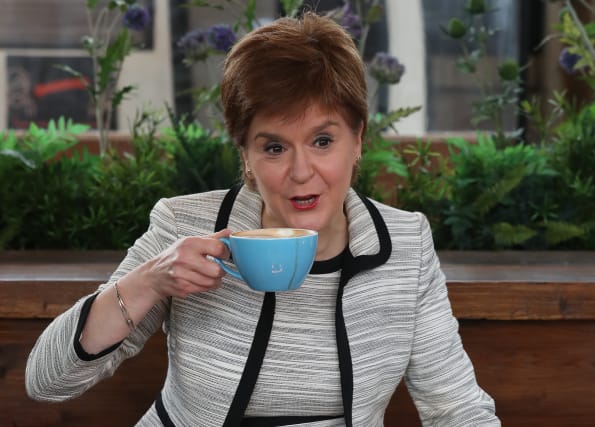 Last-minute changes to tough new lockdown restrictions in Scotland to exempt some cafes have created a “lack of clarity”, Scotland’s First Minister has conceded.

Pubs, bars, restaurants and cafes outside central Scotland will only be allowed to operate indoors between 6am and 6pm from Friday and not serve alcohol, though drinks can be served until 10pm in outdoor areas.

But pubs and licensed restaurants in five health board areas – Greater Glasgow and Clyde, Lanarkshire, Ayrshire and Arran, Lothian, and Forth Valley – will be forced to close for all but takeaway service for 16 days from 6pm on Friday.

Nicola Sturgeon revealed on Thursday that cafes can be exempt from the central belt shutdown during the day if they do not sell alcohol, triggering confusion about how a cafe is defined.

Speaking at the Scottish Government’s coronavirus briefing on Friday, she acknowledged frustration on that point but said the new measures attempt to strike a balance between saving lives and protecting the economy.

She also announced six further coronavirus deaths had been registered in the past 24 hours in Scotland among people who first tested positive in the previous 28 days, taking this total to 2,544.

There were 1,246 new coronavirus cases recorded in the same period – a record high.

This represents 16.2% of newly-tested individuals, up from 13.5% on Thursday.

The First Minister said the cafe exemption aims to address a “potential anomaly” where outlets which have an alcohol licence but where selling drink is “very, very incidental to their business” would have been forced to close.

She said it is important cafes can stay open to counter the isolation felt by people who cannot currently meet others in their homes.

She added that if restaurants were able to stop selling alcohol and redefine themselves as cafes to remain open, this would “undermine” the aims of the new restrictions.

Addressing the change, she said: “I readily accept that that has resulted in a lack of clarity. Sometimes that’s the price we have to pay right now for trying to be as flexible as possible.

“It would have been much easier and would have given much greater clarity just to stick to the position that cafes with a licence had to close, but we decided to try to strike a different balance.”

A definition of what constitutes a cafe has been published in the Scottish Government regulations, she added.

Ahead of the briefing, Scotland’s national clinical director Professor Jason Leitch told BBC Radio Scotland’s Good Morning Scotland programme the measures do not create a “neat division”, but said he expects hospitality venues to “know which they are”.

Earlier, the Scottish Licensed Trade Association posted on Twitter: “Absolutely ridiculous that on the day new regulations come into force we still do not know what licensed premises in the central belt will be allowed to open till 6pm for food only – shambles.

“What is a ‘licensed cafe?’ Find out maybe today!”

The First Minister told the briefing: “Government, all governments, are trying to strike right now almost impossible balances between lives and jobs.

“Speaking for the Scottish Government, we are trying to do that as best we can and as I’ve said all along, we will not always get it perfectly right, but we are trying our best to get through this as well as we can.”

She said she is “desperately sorry” for having to bring in the restrictions, which last until October 25.

Ms Sturgeon added: “We do believe this can have, and will have, a significant impact on transmission.

“I know these are unwelcome and believe me when I say they have been imposed with the greatest reluctance, but I would urge all of you to stick with them.

“The only alternative to restrictions like this just now is a continuing surge in Covid which would take more lives and probably in turn require even tighter restrictions in the weeks and months to come.”

Explaining the latest daily virus figures, she said 440 of the new cases are in Greater Glasgow and Clyde, 306 are in Lanarkshire and 192 are in Lothian.

There are 397 patients in hospital confirmed to have the virus, up by 20 in 24 hours. Of these patients, 33 are in intensive care – up by two.

Further measures impacting the five areas of central Scotland will be imposed from Saturday, including contact sports for adults aged 18 and above being suspended for the next two weeks – apart from for professional sports.

Indoor group exercise activities will no longer be allowed, however gyms can remain open for individual exercise.

Snooker and pool halls, indoor bowling, casinos and bingo halls will also close and no outdoor live events are allowed in these five areas.