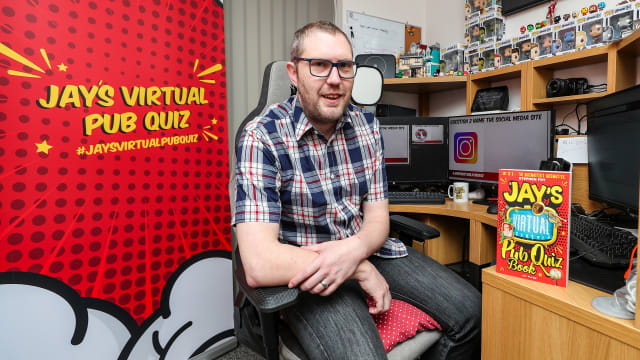 A quizmaster who spent two years as a down and out on the streets of London will return to the capital to receive an MBE awarded in the Queen’s Birthday Honours list.

Jay Flynn’s online virtual pub quiz was intended as a small event to entertain his friends and regular quizzers using a webcam from his living room, after the lockdown shut pubs and bars across the nation.

He absent-mindedly left the Facebook event public and instead of the expected 30 or 40 players, it attracted interest from half a million people.

The weekly events, also streamed on YouTube, became a lockdown phenomenon, regularly bringing hundreds of thousands of people together during the socially-distanced weeks of isolation.

Mr Flynn’s efforts have also now raised three quarters of a million pounds for charities and, for efforts to the Covid-19 response, he has been awarded the MBE.

The 38-year-old, who lives in Darwen, Lancashire, with his wife, Sarah and son, Jack, aged three, said: “I nearly fell backwards off my chair. I thought, ‘This can’t be real.’

Mr Flynn had been running a pub with a business partner until March, where he ran the quiz nights until the shutdown and decided to switch to the virtual event on Facebook.

He said: “I did not realise it at the time that the setting was to ‘public’ and by the time of the first quiz on the 26th of March we had half a million people interested.

“I think it was because in those first few days everybody didn’t know what they were doing or supposed to be doing. We didn’t have anything to look forward to.

“That Monday night when Boris said, that’s it, lockdown – what do you do now with our lives?

“I think the reason it captured my friends’ imagination was everybody had something to look forward to.

“It’s a great, really, really positive community, everybody is really friendly. We have had lovely messages from people saying, ‘I have re-connected with parents and we have been quizzing together.’

“I’m proud to know we played our part.”

The quizzes are free to play but there is a Just Giving page available for people to donate to charity.

The event holds the Guinness World Record for most viewers of a quiz YouTube live stream with more than 182,000 people playing.

Mr Flynn’s quiz has also raised money for homeless charities, an issue close to his heart.

Originally from Roehampton, London, after a relationship breakdown in mid-2007 he found himself homeless and for two years living on Victoria Embankment.

A rough-sleeper team from St Martin-in-the-Fields Church in central London helped find him temporary accommodation and get back on his feet.

“They just rebuilt me from a shell,” Mr Flynn said, “I don’t forget, ever.”