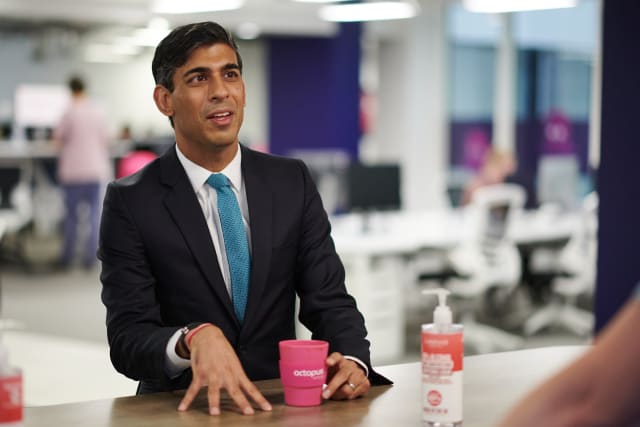 The FTSE 100 lifted to a three-week high as traders welcomed an expansion of furlough measures for companies hit by tighter restrictions.

Chancellor Rishi Sunak said the Government will pay two thirds of the wages of staff in pubs, restaurants and other businesses if they are forced to close under new coronavirus restrictions.

It came on top of broad optimism from traders that US politicians are getting nearer to agreeing their own package of financial relief.

Across the Atlantic, the Dow Jones moved higher after the opening as investors continued to bank on the appearance of some fresh US stimulus measures.

Optimism from traders over a deal helped to buoy European indices later in the session, although the German Dax only made minor gains.

Connor Campbell, financial analyst at Spreadex, said: “It was a broadly positive end to a bit of a wild week, with most of the Western indices in the green.

“Looking ahead to next week, and investors will likely remain preoccupied with the state of play regarding US stimulus and, somewhat related, any election headlines.

“Complicating matters is the October 15 Brexit ‘deadline’, a potential source of anxiety for the pound and FTSE.”

Sterling moved higher on Friday as traders rode the wave of optimism following the furlough extension.

Pub groups and hospitality firms had a positive session, with JD Wetherspoon, Mitchells & Butlers and Whitbread all making strong gains as they welcomed the Government’s new financial support measures for sites forced to close again.

Elsewhere, real estate giant British Land jumped in value after it said it will resume paying dividends to shareholders next month and hailed “encouraging” rent collections from September.

The company said all of its retail assets and 86% of tenanted stores had reopened by the end of September.

Shares in Marston’s jumped after the competition regulator waved through the £780 million merger of its brewing arm with Carlsberg UK.

It moved 8.58p higher to 50.1p as investors welcomed the green light, which is expected to help streamline its beer business.

The price of oil nudged higher as it continued a week of strong gains on the back of reports that adverse weather could hit supply in Mexico.