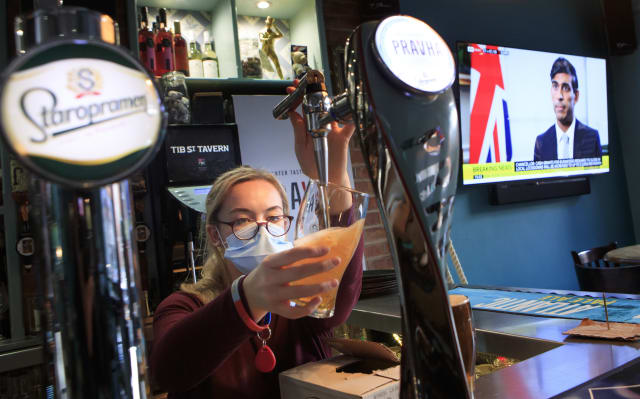 Workers in pubs, restaurants and other businesses which are forced to close under new coronavirus restrictions will have two thirds of their wages paid by the Government, the Chancellor has announced.

Rishi Sunak said the expansion of the Job Support Scheme would protect jobs and provide “reassurance and a safety net” for people and businesses across the UK in advance of a potentially “difficult winter”.

It comes ahead of the expected closure next week of hospitality venues in coronavirus hotspots, and follows intense pressure on the Government for a targeted extension of the furlough scheme.

Mr Sunak insisted that the new support was “very different” to furlough, which he previously declined to extend – arguing it was “fundamentally wrong” to hold people in jobs that only existed inside the scheme.

But mayors from the north of England said the new measures appeared not to go “far enough” to prevent “genuine hardship, job losses and business failure this winter”.

The support will see the Government pay two thirds of each employee’s salary – up to a maximum of £2,100 a month – if their employer is legally required to close their premises because of restrictions.

It will launch on November 1 and last for six months.

Businesses will be able to claim the grant when they are subject to restrictions and employees are off work for at least seven consecutive days.

Venues which are already legally closed, such as nightclubs, will also be eligible.

A Treasury source said the scheme was expected to cost “hundreds of millions a month” but that costings would depend on “how things develop” across different sectors and areas of the country.

Employers will not be required to contribute towards wages, but will be asked to cover national insurance and pension contributions.

The Treasury estimates that, for at least half those employees covered by the new support, firms will not have to pay anything at all.

Ministers will also increase cash grants to businesses in England which are forced to close to support with fixed costs, with the grants linked to rateable values.

Up to £3,000 per month will be payable every fortnight, the Treasury said.

Mr Sunak told reporters: “Throughout this crisis, my priority has always been to protect jobs so today I’m announcing an expansion of our Job Support Scheme, specifically to protect those jobs of people who work in businesses who may be asked to close.

“If that happens, those workers will receive two thirds of their wages for the time that they’re unable to go to work. I hope this provides reassurance and a safety net for people and businesses in advance of what may be a difficult winter.”

She said he was having to “tear up” his winter economy plan – which he outlined just a fortnight ago – and criticised the measures for failing to support sectors that are unable to operate at full capacity.

They said: “We are pleased that the Government has listened and recognised that any new system of restrictions must come with a substantial package of financial support.

“What has been announced by the Chancellor today is a start but, on first look, it would not appear to have gone far enough to prevent genuine hardship, job losses and business failure this winter.

“Mayors and leaders from across the north will be meeting tomorrow to discuss it in more detail and we will make a further statement then.”

Boris Johnson’s chief strategic adviser Sir Edward Lister is understood to have spoken to northern leaders on Friday afternoon, amid criticism that they have not been consulted by the Government ahead of local lockdown changes.

A further 13,864 lab-confirmed cases of coronavirus in the UK were reported on Friday, and 87 more deaths were confirmed of people who died within 28 days of testing positive for coronavirus.

Downing Street has previously said that early data suggested a “significant proportion” of exposure to Covid-19 is seen in the hospitality sector.

Ministers are expected to outline a three-tier local lockdown system on Monday, which could see hospitality venues in the worst affected areas being forced to temporarily close.

Separate figures suggested coronavirus cases are doubling about twice as fast in the North West, Yorkshire and the West Midlands as for the whole of England.

Experts behind the React study said the rate of growth of the epidemic across England has slowed in the last month, but the country was now at a “critical point in the second wave”.

One of those who led the study, Professor Steven Riley from Imperial College London, warned: “Prevalence is going to continue to go up unless either compliance with the messaging improves, or additional measures are introduced that are supported by the general public.

“There is a very strong epidemiological case for trying to reduce the transmission right now.”

Data from the Office for National Statistics estimated that 224,400 people in England had coronavirus between September 25 and October 1, equating to about one in 240 people.