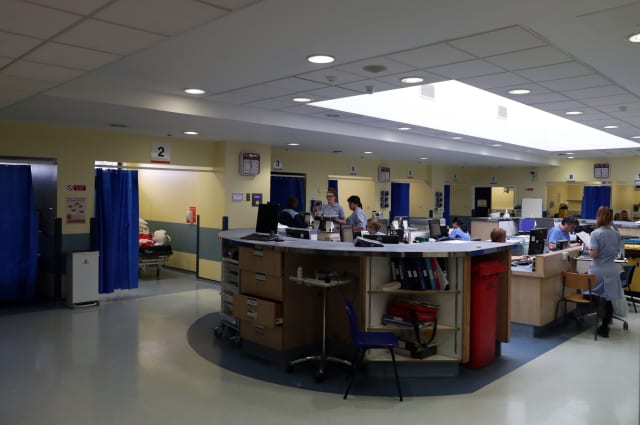 The number of people waiting more than a year to start hospital treatment is at its highest level since 2008.

The continuing impact of Covid-19 on delays to operations and treatment is shown in new NHS England data.

Some 111,026 people were waiting more than 52 weeks to start hospital treatment in August, the highest number for any month since September 2008.

The number of people waiting more than 18 weeks to start hospital treatment also tripled in August compared to the same month last year.

Some 1.96 million people had waited more than 18 weeks for treatment in August, around three times the number for August 2019 (662,043) and the second highest total for any calendar month since records began in August 2007.

The figure is down slightly from the number for July 2020, which was 2.15 million and was the highest number since records began.

The latest data also showed that the number of people waiting more than six weeks for diagnostic tests is 10 times higher than the same point last year, although this has improved since earlier in the year.

A total of 472,088 patients were waiting for one of 15 standard tests, including an MRI scan, non-obstetric ultrasound or gastroscopy.

The equivalent number waiting for more than six weeks in August 2019 was 42,926.

An NHS spokesman said: “Hospitals are carrying out more than a million routine appointments and operations per week, with around three times the levels of elective patients admitted to hospital than in April, as they continue to make progress on getting services back to pre-Covid levels including scanning services which are delivering millions of urgent checks and tests.

“It is obviously vital for patients that this progress continues, and isn’t jeopardised by a second wave of Covid infections spiralling out of control.”

The latest data also showed that the total number of people admitted for routine treatment in hospitals in England was down 43% in August compared with a year ago.

The year-on-year decrease recorded in July was 55%, and in June the drop was 67%.

Overall, the waiting list, including people waiting under 18 weeks, stood 4.22 million in August, lower than it was in February (4.43 million) before Covid-19 struck.

Experts have suggested this is due to patients delaying seeking help and GPs making fewer referrals.

Sara Bainbridge, head of policy at Macmillan Cancer Support, said: “Disruption to cancer diagnosis and treatment is having a traumatic impact on cancer patients’ lives.

“Today’s data shows that, six months from the start of the pandemic, there were still thousands fewer people being tested or treated for cancer than the same time last year, meaning that the backlog of patients continues to grow.

“The implications of this are extremely worrying.”