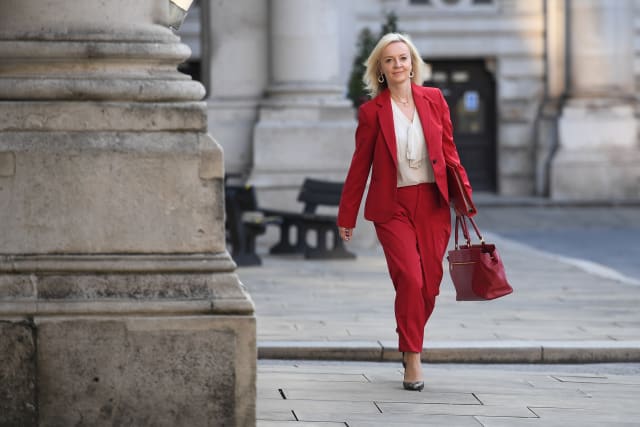 Liz Truss has rebuffed fresh calls to guarantee in law all UK farming standards, claiming such a move would disrupt trade with developing nations.

The International Trade Secretary told MPs Labour’s approach could result in a “blanket ban” on any food products which do not comply exactly with British farming regulations.

Speaking in the Commons, Ms Truss asked Labour counterpart Emily Thornberry: “So is she saying she wants to ban Kenyans from exporting their products to us if they don’t follow exactly the same farm standards as here in Britain?

“I want to make sure our farmers are able to continue with their high standards, but I don’t want to stop developing countries exporting their goods to us.”

The pair clashed during international trade questions as Ms Thornberry warned of the impact of the Government’s post-Brexit policy on British farmers.

The House of Lords last month amended the Agriculture Bill in a bid to block the import of foodstuffs produced abroad at lower animal welfare standards, amid warnings over chlorinated chicken or hormone-treated beef entering the UK market from the US.

The Government is expected to overturn the amendment in the Commons, and has consistently argued existing protections are already in place and they have no intention of watering them down.

Ms Thornberry earlier said: “If it is (Ms Truss’s) argument that we don’t need Labour’s amendments because bans on relevant imports are already enshrined in law, can she please tell us which law prevents the import of pork that has been produced on American farms that continue to use sow stalls?”

Ms Truss replied: “Well (Ms Thornberry) is of course talking about an animal welfare issue, and as I made very clear earlier on, we will not allow the high animal welfare standards of our pig producers to be undermined.”

Ms Thornberry countered: “There is no import ban against pork produced on farms using sow stalls because, as (Ms Truss) said, it’s an issue of animal welfare not one of food safety.

“That means, if the Government drops tariffs on US pork, British pork farmers will be undercut by cheap imports from American agricultural companies using practices that have been banned in our country for the last 21 years.

“So will the Secretary of State listen to reason and write into the law the protection of all UK farming standards against imports that don’t meet them?”

Ms Truss appeared to make a slip of the tongue and forget to say “not” when she replied: “In any trade deal we strike, we will be taking into account our high standards to make sure our farmers are undermined.”

She added: “If (Ms Thornberry) is suggesting a blanket ban on any foodstuffs that do not comply exactly with British farm regulations, what she is talking about is preventing developing countries sending their foodstuffs to the United Kingdom.

“She will understand that under MFN (most-favoured-nation) rules you have to apply the same standards to every country you’re dealing with.”

In an earlier response to Labour’s Cat Smith (Lancaster and Fleetwood), Ms Truss said: “We’re absolutely clear that we’re going to stand up for our high standards in any deal we strike, including with the United States, and making sure that the high standards our farmers operate to will not be undermined.”

“What I can say would be unhelpful though to our trade relationship with Africa would be Labour and SNP proposals to dictate domestic production standards in the developing world, which has the potential to kill off our trade with those countries.

At this point Speaker Sir Lindsay Hoyle intervened, telling Mr Hands: “Order! No, no, no, no, order! Minister, and I’ll say to both frontbenches, topicals (topical questions) are meant to be short and punchy.”