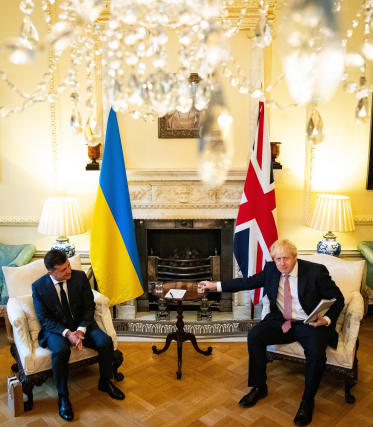 Boris Johnson has insisted Britain’s support for Ukraine is “rock solid” as the country’s president thanked the Prime Minister for his backing in the face of Russian aggression.

The comments came as the two leaders met in Downing Street to sign a strategic partnership agreement covering trade and defence ties.

Mr Johnson told President Volodymyr Zelenskyy: “We are very pleased and excited that it will intensify the relationship between Britain and the Ukraine that has been developing very, very well in the last few years.

“Our commitment to Ukraine is rock solid.

The Ukrainian president said: “Thank you for your support of sovereignty of the Ukraine especially now when we see the aggression by Russia.”

Downing Street said: “The UK has been outspoken in support of Ukraine’s sovereignty in the face of Russia’s destabilising behaviour.

“The UK has been a staunch defender of Ukraine’s right to self-determination, particularly since the illegal annexation of Crimea by Russia in 2014.”

The meeting with Mr Johnson is part of a two-day visit by Mr Zelenskyy to the UK which has included a tour of the Prince of Wales aircraft carrier in Portsmouth.

British troops have trained more than 18,000 members of Ukraine’s armed forces as Kiev fights separatists in the east of the country.

Trade between the UK and Ukraine is currently worth £1.5 billion per year.