What are the latest coronavirus rules across the four nations of the UK? 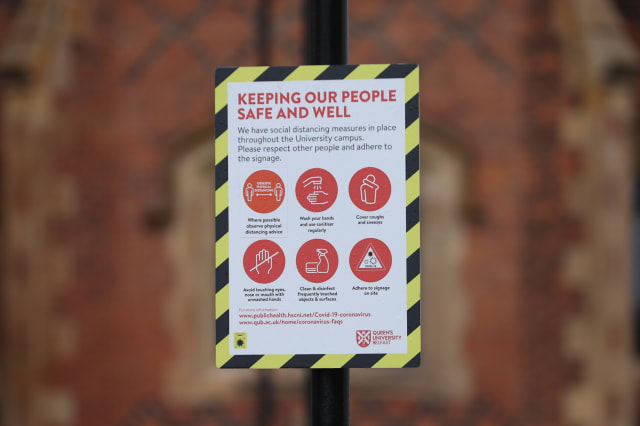 Rules aimed at preventing the spread of Covid-19 have been brought in and updated across the four nations of the UK over the last few months.

Tougher restrictions have recently been brought in across the nations but do vary – here, the PA news agency takes a look at the current rules in each country.

Last month, new rules were introduced in England accompanied by tougher fines for those who break them.

Pubs, bars and restaurants must offer table service only and hospitality, leisure, entertainment and tourism businesses must close between 10pm and 5am.

People working in retail, travelling in taxis, and staff and customers in indoor hospitality, except while seated at a table to eat or drink, will have to wear face coverings.

Working from home is being encouraged again, with anyone who can being asked to do so.

The rule of six, that any social gatherings of more than six people are against the law, was extended to all adult indoor team sports.

Children are included in the number of people, but there are some exceptions including for work or registered childcare.

The Government has also confirmed that people in an established relationship do not need to socially distance.

A maximum of 15 people can attend wedding ceremonies and receptions, but the limit remains at 30 for funerals.

The penalties for disobeying the rules will also be greater – failing to wear a mask or breaking the rule of six will see fines doubling to £200 for a first offence.

Businesses which break the rules could be fined up to £10,000 and closed.

Local restrictions are also in place across the north of England.

In many places in the north of England, social mixing between people in different households has been banned or reduced.

In Lancashire, Blackpool, and Blackburn with Darwen, people must not host people they do not live with at their home or garden, or meet in others’ homes or gardens.

Anyone living in areas including Bury, Manchester, Rochdale, Salford, Tameside, Trafford, Blackpool, Stockport and Wigan must also not mix with people outside of their household.

People in areas including Merseyside, Liverpool and Wirral must not meet with people they do not live with in their homes or gardens, or in indoor settings.

Manchester, Liverpool and Newcastle have among the highest cases of Covid-19, with areas across the north having much greater rates of infection than the south of England.

Meanwhile, restrictions in Durham, Gateshead, Newcastle, North Tyneside, South Tyneside, Northumberland and Sunderland could result in people being fined if they mix with others from outside their household or bubble in indoor settings, including pubs and restaurants.

Anyone living in Midland areas including Birmingham, Sandwell, Solihull, Wolverhampton and Leicester must not mix with people outside of their household either indoors or in a private garden.

They have also been told to avoid socialising with other households in public venues.

On Wednesday, Nicola Sturgeon announced pubs, restaurants and cafes in most of Scotland are being barred from selling alcohol indoors for more than two weeks.

Five health board areas – Greater Glasgow & Clyde, Lanarkshire, Ayrshire & Arran, Lothian, and Forth Valley – face stricter restrictions, with pubs and licensed cafes to shut to all but takeaway customers for the same period.

In other areas, pubs and restaurants will only be able to open indoor spaces between 6am and 6pm and will be barred from serving alcohol there – though they can sell drinks outside until 10pm.

The measures come into force at 6pm on Friday for 16 days until October 25.

People in the five health boards under tougher restrictions have also been asked to avoid public transport unless absolutely necessary in the next two weeks, and use it only when travelling to work, school or for other unavoidable reasons.

While a travel restriction is not being enforced on people in these areas, Ms Sturgeon urged residents not to travel beyond their own health boards, and for those elsewhere in Scotland not to visit them.

Snooker and pool halls, indoor bowling alleys, casinos and bingo halls will close in these areas for two weeks from October 10, with contact sports and indoor group exercise for those 18 and over suspended for the same period.

Contact sports for adults aged 18 and above are being suspended for the next two weeks, apart from for professional sports.

Indoor group exercise activities are no longer allowed, though gyms can remain open for individual exercise.

Outdoor live events will also be banned in the five areas for the next two weeks.

People in all of Scotland are legally required to wear a face covering in shops, on public transport and in shops, restaurants when not seated, libraries and places of worship.

Household mixing indoors is also not allowed, with exemptions for those living alone, couples not living together, childcare and tradespeople.

Across Wales, people are not allowed to meet indoors with people they do not live with, unless they have formed an extended household.

People in Wales can meet indoors in a group of up to six people, with children under 11 not included in the number.

Outdoor gatherings of more than 30 people are banned and face coverings are required in indoor public spaces.

Pubs, cafes, restaurants and casinos in Wales must operate as table service only and close from 10pm.

Off-licences including supermarkets will also be stopped from selling alcohol at the same time each day as part of the measures.

Local lockdowns have been introduced in Denbighshire, Flintshire, Conwy and Wrexham in efforts to curb the spread of coronavirus.

It means people in these areas will not be allowed to enter or leave their areas without a reasonable excuse, such as travel for work or education, and they will only be able to meet people they do not live with outdoors.

The regions of Neath Port Talbot, Torfaen and the Vale of Glamorgan in South Wales have also gone into local lockdown, which means people are not able to enter or leave these areas without a reasonable excuse.

They are not able to meet indoors with anyone they do not live with, and extended households have been suspended.

Households across Northern Ireland are not allowed to mix indoors.

Up to six people from no more than two households can meet outside in a private garden. However, if the gathering is with members of a bubble, the maximum is 15 people.

From October 1, pubs and restaurants are required to close at 11pm, and alcohol and food will stop being served at 10.30pm.

New restrictions have been introduced in the Derry City and Strabane District Council area.

Northern Ireland’s First Minister acknowledged that people are “fed up” with Covid-19 and “want it to be over and done with” but urged continued compliance with public health rules.

The Executive is due to meet on Thursday to discuss further restrictions.