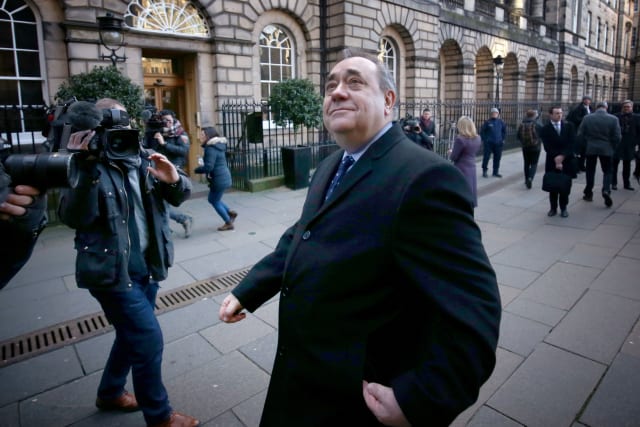 Alex Salmond told Nicola Sturgeon his legal challenge against her Government’s handling of sexual harassment allegations against him had an “excellent” chance of success some six months before his court victory, newly published messages have revealed.

On June 3 2018, Mr Salmond asked to meet his successor to discuss matters “privately”, and also offered to show her the petition for judicial review drawn up by his legal team.

He told her: “I was intending to give you sight of the petition for JR (judicial review) drafted by senior counsel. You are a lawyer and can judge for yourself the prospects of success which I am advised are excellent.”

The offer was made in a series of WhatsApp messages between Ms Sturgeon and her predecessor, which she revealed in a written submission to the committee probing the Scottish Government’s botched handling of sexual harassment allegations against him.

In these, Mr Salmond conceded the legal challenge would be “rough” for him as it would bring the allegations into the public domain, but he said the process would give him the chance to clear his name.

He said: “The JR (judicial review) will be rough for me since the hearing will almost certainly be made public but at least I will have the opportunity to clear my name and good prospects of doing so – but for the Government?”

He added that when the case went to court “we will have to produce evidence to demonstrate prior process” – telling Ms Sturgeon Permanent Secretary Leslie Evans had “admitted” this.

Ms Sturgeon, who replied two days later on June 5, said she had been considering the message and “what I need to do in light of it”.

She offered to meet him, with Mr Salmond responding: “I take it this is totally informal, one to one.”

The First Minister said she was “happy for it to be one to one”, as the pair arranged to meet in Aberdeen in a hotel where she was staying.

The following month Mr Salmond messaged the First Minister again, urging her to encourage Ms Evans to go down the route of arbitration in the legal dispute.

He said “there remains a way to resolve this but it requires the PS (Permanent Secretary) to be encouraged to accept that confidential arbitration offers the best solution”.

Mr Salmond, in a message dated July 5, told Ms Sturgeon: “I hope you will do so but time is now very short.”

The pair arranged to meet again in Ms Sturgeon’s home on July 14, with Mr Salmond again messaging her the following day.

In that he told her he was aware “you need to reflect further on how to progress things”, adding he was “not blind to the difficulty of legal advice being suspicious of arbitration”.

But Ms Evans appeared to rule out arbitration as not being “appropriate to the circumstances” of the case.

Mr Salmond messaged Ms Sturgeon a copy of the letter from the Permanent Secretary to his legal team in which she said this would cause “unavoidable further delay”.

The Permanent Secretary stated: “We do not consider that arbitration would be appropriate to the circumstances. This is an investigation of serious complaints made by civil servants involving a former minister.

“Submitting the process to an external decision maker would not be appropriate.”

Mr Salmond’s last message to Ms Sturgeon was on July 20, saying  a “full rebuttal of all complaints” against him had been submitted.

In January 2019, the Court of Session ruled the Scottish Government’s actions were “unlawful in respect that they were procedurally unfair and that they were tainted with apparent bias”.

Workers and students strike against Lukashenko