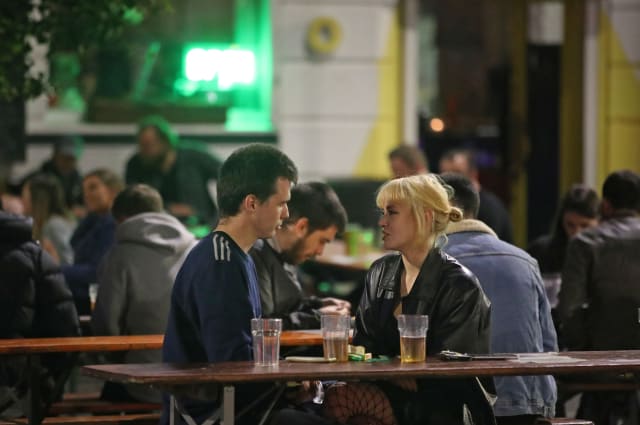 Swathes of northern England are facing the prospect of tough new coronavirus restrictions – including the possible closure of pubs and restaurants – amid fears the disease is spiralling out of control.

Ministers were said to be considering the new measures, which could come as early as Monday, according to media reports, as infection rates continue to soar in cities such as Manchester, Liverpool and Newcastle.

Downing Street and the Department of Health and Social Care both declined to comment on the reports.

The move, if confirmed, would however be another body blow for the hard-pressed hospitality industry in the regions already reeling from the imposition of the controversial 10pm curfew.

Chancellor Rishi Sunak is finalising a package of financial support for the sector, the Financial Times reported, amid fears of a fresh wave of job losses.

The latest moves come after First Minister Nicola Sturgeon announced a further tightening of restrictions in Scotland from 6pm on Friday.

Under the new rules, indoor hospitality venues will only be allowed to operate between 6am and 6pm daily, selling food and non-alcoholic drinks only, while outdoor bars will be allowed to serve alcohol until 10pm.

In the five regions with the highest number of cases – including Glasgow and Edinburgh – licensed premises will have to shut for a 16-day period, although they can offer takeaway services.

Speaking in the Scottish Parliament, Ms Sturgeon warned that without the “short, sharp” package of measures, the disease could be “out of control” by the end of the month.

In England, Nottingham looks set to be the latest area to face new restrictions following a surge in infections.

The prospect of new measures comes amid growing unrest over the existing controls – including among Conservative MPs.

Tory rebels are threatening to try to overturn the 10pm curfew in an expected Commons vote next week, amid claims that it is proving counterproductive in health terms while further damaging the already weakened economy.

At Prime Minister’s Questions on Wednesday, Sir Keir Starmer challenged Boris Johnson to produce the science behind the curfew, raising the prospect of a Government defeat if Labour joins the rebels in the division lobbies.