Narrowing your eyes can help build a bond with your cat, study suggests 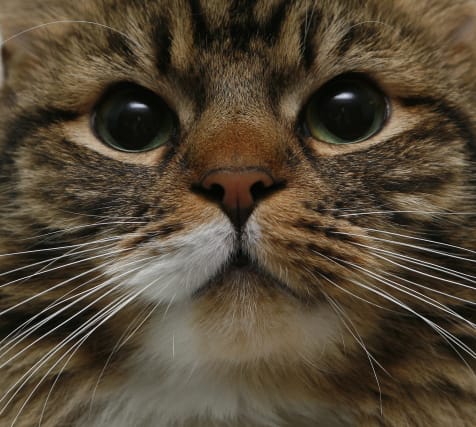 Scientists have discovered narrowing your eyes is the best way to build a rapport with cats.

In a study by the universities of Portsmouth and Sussex, researchers found that the technique mimics what is known as a cat smile – referred to as a 'slow blink' – and it appears to make the human more attractive to the cat.

Professor Karen McComb, from the School of Psychology at the University of Sussex, who supervised the work, said: "As someone who has both studied animal behaviour and is a cat owner, it's great to be able to show that cats and humans can communicate in this way.

"It's something that many cat owners had already suspected, so it's exciting to have found evidence for it.

"This study is the first to experimentally investigate the role of slow blinking in cat–human communication. And it is something you can try yourself with your own cat at home, or with cats you meet in the street. It's a great way of enhancing the bond you have with cats.

"Try narrowing your eyes at them as you would in a relaxed smile, followed by closing your eyes for a couple of seconds. You'll find they respond in the same way themselves and you can start a sort of conversation."

The research team, led by Dr Tasmin Humphrey and Professor Karen McComb, animal behaviour scientists at the University of Sussex, undertook two experiments for the study published in the Nature journal Scientific Reports.

Cats
Cute tabby kitten sat on the breakfast table looking up
Cute scottish fold cat resting on the sofa .
Domestic Cat Lies in a Basket with a Knitted Blanket, Looking At the Camera. Tinted Photo.
Tabby cat and feet of a person wearing socks with cat designs on it
Cute American short-hair cat resting on a sofa
A bengal baby cat just got adopted by a métis man. The pet is getting to know its master. Complicity and affection in a warm home.
Portrait of cute domestic cat with green eyes lying with owner at home. Unrecognizable young woman petting purebred straight-eared long hair kitty on her lap. Background, copy space, close up.
Beautiful short hair cat lying on the bed at home
Little red kitten isolated on a white background.
Photo taken in Tokyo, Japan
What is today's rice?
American shorthair striped cat with a dissatisfied face
Little cat licking
Portrait of a funny cat looking out of the box isolated on white background
Photo taken in Neu-Ulm, Germany
1 year old cream tabby ginger maine coon cat playing with lawn sprinkler water fountain outdoors in the garden raising it's paw
Small, sleepy Siamese kitten, isolated on white background
Thai cat with a doll, concept for pet at home.
Kitten laying on a sofa beside a games control looking at the camera.
Playful kitten playing on the sofa, hiding between cushions and meowing
Woman holding up a kitten and smiling, cuddling her.
Small tabby mixed breed kitten under gray and red wool plaid. Pets care and adoption concept. Close up, selective focus.
Cute young tabby and white cat with big green eyes, looking up at camera
Cat on the kitchen table
Cute little kitten sleeping on plaid
Kitten looking at fish in bowl, side view, studio shot
cute tabby cat walking on the Sunny garden among pink flowering branches of Apple in may on a clear day
Woman's hand stroking cat on her lap
playful young white unicolored cat looking at feather
Ginger Cats is Sitting on a shelf
gray striped cat with womans hand on a brown background. World Pet Day.
Animal themes
cream tabby ginger maine coon cat lying on grass grooming licking it's paw outdoors in the back yard with closed eyes
Studio portrait of cat
Black and white cat leaning on railing looking away from camera
Domestic life cat
White cat with different color eyes hides behind a green plant. Turkish angora eats peace lily green leaves in living room. Domestic pets and houseplants.
happy cat lovely comfortable sleeping by the woman stroking hand grip at . love to animals concept .
Portrait of tired cat lying on wooden floor
Cute british shorthair sleeping on the couch
A *Chinchilla cat
Kitten on lap.
Flash photo of marmalade or orange cat looking surprised with large eyes, ears back.
Close-up shot of a black tabby cat while he is doing his own selfie by a smart phone.
A tabby cat with brown nose and green eyes looking into the camera. The background is green and matches the cat's eyes.
Portrait of birman cat
Two orange kittens snuggle together on a cozy blanket with a lap top computer next to them
Scottish fold kitten looking at camera
Up Next

The first revealed that cats were more likely to slow blink at their owners after their owners have slow blinked at them, compared to when they do not interact at all.

The second experiment, this time with a researcher from the psychology team, found that the cats were more likely to approach the experimenter's outstretched hand after they had slow-blinked at the cat, compared to when they had adopted a neutral expression.

Dr Humphrey said: "Understanding positive ways in which cats and humans interact can enhance public understanding of cats, improve feline welfare, and tell us more about the socio-cognitive abilities of this under-studied species.

"Our findings could potentially be used to assess the welfare of cats in a variety of settings, including veterinary practices and shelters.

"In terms of why cats behave in this way, it could be argued that cats developed the slow blink behaviours because humans perceived slow blinking as positive.

"Cats may have learned that humans reward them for responding to slow blinking. It is also possible that slow blinking in cats began as a way to interrupt an unbroken stare, which is potentially threatening in social interaction."