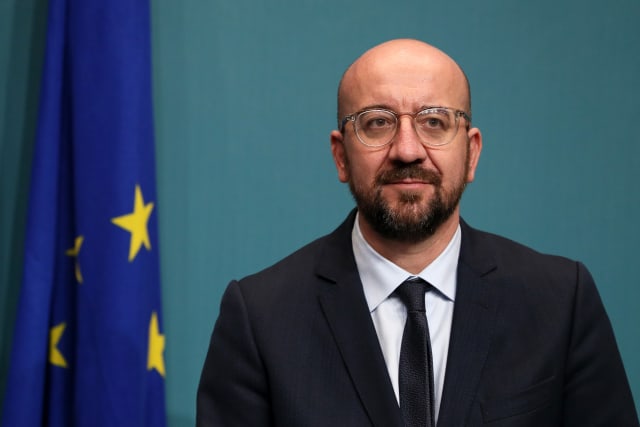 He meets Irish Taoiseach Micheal Martin ahead of next week’s summit of EU leaders in Brussels.

Ireland’s premier said considerable gaps remained in the trade talks with the UK.

“I hope that, as negotiations intensify, it will be possible to find a means to bridge the considerable gaps that remain between the EU and UK positions.

“As EU leaders have stated repeatedly, we want an agreement, but it cannot be at any price.

“The EU has also made it clear that the UK needs to demonstrate its commitment to full and faithful implementation of the Withdrawal Agreement, including the Protocol on Ireland.

“Trust in this regard urgently needs to be restored.”

The Northern Ireland Protocol, which forms part of the Brexit Withdrawal Agreement, is designed to prevent the return of a hard border on the island of Ireland.

Part of its solution to this problem is to keep Northern Ireland in the Single Market for goods, unlike the rest of the UK, creating new checks for trade across the Irish sea.

How these checks are implemented is still being negotiated at a joint committee between the UK and the EU.

While the UK has not stated its intention not to comply with these checks, the Internal Market Bill – if implemented – would give their ministers the power to overrule them, which would breach the internationally binding agreement reached last year.

UK Prime Minister Boris Johnson has set a deadline of October 15 if a deal is going to be in place by December 31, when the transition period in which the UK remains in the single market ends.

Formal talks have come to a close but informal discussions are under way this week in London.

The EU has told Mr Johnson that it is “time for the UK to put its cards on the table” in post-Brexit trade negotiations.

Number 10 said Mr Johnson reiterated following discussions with Mr Michel that the UK would be prepared to leave at the end of the transition period without a trade deal, but accepted brokering one would be “better for both sides” and that talks should “intensify”.

The UK’s chief negotiator, Lord Frost, has told the Lords EU Committee that an accord with the EU remained “some way away”.

The Taoiseach and Mr Michel will meet in Farmleigh in the Irish capital to discuss issues on the agenda of the European Council, also including  EU co-ordination on the health and economic impacts of Covid-19, climate action and how to deepen the EU’s relationship with Africa.

Mr Martin added: “We will also explore how best to step up our ambition on climate action; how to improve our co-ordination on the health and economic impacts of Covid-19, supporting Europe’s recovery; and how to deepen the EU’s relationship with Africa.

“On all of these issues, Ireland will continue to engage positively with our EU partners in the wider global interest.”