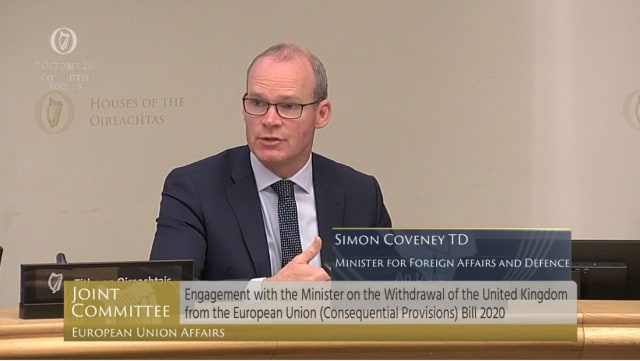 Attempts by the British Government to push through plans to override parts of the Brexit divorce deal would be a “monumental failure of politics and diplomacy”, it has been claimed.

Ireland’s Foreign Affairs Minister Simon Coveney said that if the UK allowed the issue to end up in court it would be a “folly”.

The EU and the UK have clashed over the British Government’s Internal Market Bill, which led Brussels to threaten legal action if it does not ditch the plan to break parts of the international agreement.

Mr Coveney, who appeared before the European Union Affairs Committee, said he does not believe it will reach that point.

“I think the British Government would see the folly of that approach but having said that we have difficult issues to overcome,” he told the Oireachtas committee.

He said there is “no justification” for the Bill and said it is a negotiating tactic that has backfired on the British Government.

Mr Coveney said it is clear from the ongoing negotiations between Brussels and the UK that the best-case scenario is getting a very basic trade deal that avoids tariffs and quotas.

He said there are two major obstacles to overcome to get that agreement.

“When we signed off on a Withdrawal Agreement and in parallel with that a political declaration, the ambition from both sides was to have a very comprehensive partnership agreement that involved multiple things, including trade on a level playing field,” Mr Coveney said.

“It’s quite clear that in many of those areas we are not getting a permanent and comprehensive agreement on a future relationship.

“The focus is on getting a core agreement on trade and what is required to do that, and then put in place contingency plans in a number of other areas that may not be permanent but will give us certainty in the medium term.

“If, at the end of a transition, we don’t have a trade deal then we have significant consequences because the default arrangement will be that the EU and the UK will have to trade on the basis of WTO (World Trade Organisation) rules and conditions which may involve tariffs and quotas.”

He also warned that the second barrier is around fishing.

He said that a fisheries agreement was to be in place by mid-summer, however that has not happened.

“The position on fishing has hardened on both sides,” Mr Coveney added.

“The gap between what the UK Government is promising on fishing and what the EU mandate is in terms of negotiation is really, really wide. I don’t believe the EU will finalise a future agreement on trade without an agreement on fishing. These are two very real problems.”

He told the committee that while he believes the outstanding issues can be resolved, a new reality will take effect from the end of the transition period.

New Brexit legislation is also due to come before the Oireachtas in the coming weeks.

The Withdrawal of the United Kingdom from the European Union (Consequential Provisions) Bill 2020, which was published last month, consists of 21 parts under the remit of 11 ministers.

Mr Coveney told the committee that the number of Government ministers involved in the legislation shows the “stark” effect Brexit will have on Ireland.

He said some areas are technical and legal, while other parts of the legislation provide reassurance to communities.

Mr Coveney added that the legislation also requires co-operation from the British Government in areas including healthcare provision.