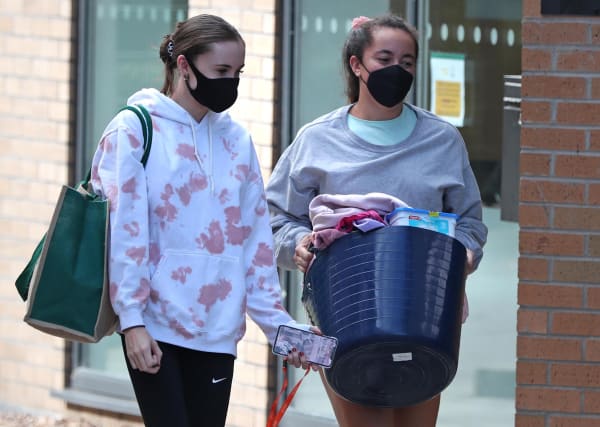 The restart of Britain’s education sector has been dealt a severe blow after three of the country’s largest universities shifted to online classes due to coronavirus outbreaks.

More than 50 universities in the UK have confirmed cases of Covid-19, after thousands of undergraduates returned to campus for the start of the autumn term.

Manchester University, where there have been 382 coronavirus cases since September 21, joined with Manchester Metropolitan University and the University of Sheffield in announcing a move to online learning to protect the health of students and staff.

The Manchester universities said they had made the decision together in consultation with the area’s director of public health, supported by Public Health England.

They added they would increase the level of online learning for most programmes from Wednesday until October 30, which would be reviewed on October 23, and face-to-face teaching would continue for some clinical or practice-based classes.

The University of Sheffield – where nearly 500 students and staff have tested positive since the start of term – said face-to-face teaching would continue on Wednesday and Thursday before it is suspended from Friday, with in-person classes to resume on October 19.

The move comes amid rising cases across parts of England, with the latest weekly infection figures showing Manchester’s rate has soared, with 3,105 new cases recorded in the seven days to October 3 – the equivalent of 561.6 cases per 100,000 people.

The University and College Union (UCU) has welcomed the move by the Manchester universities but said virus outbreaks could have been prevented had the decision been made earlier.

In a statement, UCU north west regional officer Martyn Moss said: “It is clear the Government needs to stop pretending university campuses are well prepared for this crisis, and tell all universities to halt in-person teaching to control the spread of the virus.”

Meanwhile, staff at the coronavirus-hit Northumbria University have called on vice-chancellor Andrew Wathey to resign as UCU members agreed to ballot for industrial action over health and safety concerns.

The university announced on Friday that 770 students had tested positive to Covid-19, including 78 who were symptomatic, with those testing positive now self-isolating in their accommodation.

Newcastle is among the worst affected cities in the UK, with its council leader Nick Forbes joining the leaders of Leeds and Manchester to write to the Health Secretary on Tuesday calling for new national restrictions to slow the spread of the virus.

“He needs to own up to his failings and resign immediately,” Ms Grady said.

“Our members do not want to take industrial action, but this is a matter of life and death. Unless the university changes course immediately, and moves to online learning as the default position, we will be balloting for industrial action.”

Earlier, the universities minister said students could call a new helpline if they had concerns about coronavirus.

Michelle Donelan announced the Department for Education (DfE) is launching a hotline this week – in conjunction with Public Health England (PHE) – dedicated to university staff and students.

The minister said it would be “unacceptable” for students to pay high tuition fees if an institution failed to provide support or high quality provision.

Ms Donelan added universities had the power to lower tuition fees if they did not believe they were providing a quality learning experience.

The universities minister said the DfE was working with institutions to bring forward the end of term to ensure students who needed to quarantine could still return safely to their families in time for Christmas.

She told the Education Select Committee: “What won’t change is the fact that students can go home for Christmas. Whatever happens we will make sure that is a possibility.”

Her comments come after education unions met with schools minister Nick Gibb and Ofqual chief Glenys Stacey about the timetable of the 2021 exams.