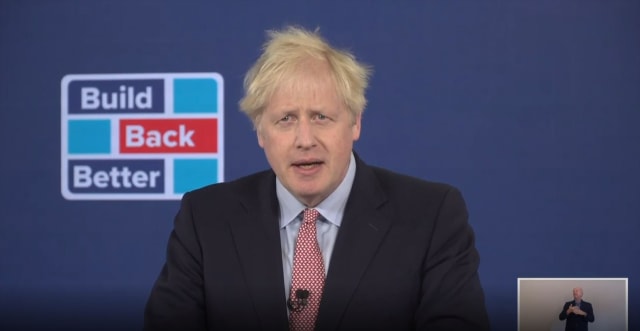 Boris Johnson promised a “bright future” for the country when it emerges from the coronavirus pandemic as he defended the “erosions of liberty” needed to curb the spread of the disease.

The Prime Minister said there was “simply no reasonable alternative” to the restrictions and state interventions aimed at tackling Covid-19.

But as the country recovers, Mr Johnson promised sweeping social and economic changes similar to the “New Jerusalem” built in Britain in the aftermath of the Second World War.

He told the Conservative Party conference – being held online due to social distancing requirements – that “after all we have been through it isn’t enough just to go back to normal” as “we have lost too much, we have mourned too many”.

The Prime Minister promised a revolution in green power generation, increased home ownership, reforms to the social care system and improvements in education as he addressed the online Conservative Party conference.

But in the face of Tory unease about the state interventions imposed by the Government as a result of the virus, Mr Johnson insisted they were the only steps he could take.

Mr Johnson said: “This Government has been forced by the pandemic into erosions of liberty that we deeply regret and to an expansion in the role of the state from lockdown enforcement to the many bailouts and subsidies that go against our instincts.

“But we accept them because there is simply no reasonable alternative.”

He praised Chancellor Rishi Sunak as he sought to dispel speculation about a rift between the two over the response to the crisis.

Mr Sunak had come up with “brilliant expedients to help business, to protect jobs and livelihoods” but had done things “no Conservative chancellor would have wanted to do”.

The Prime Minister said the UK economy went into the pandemic with “chronic underlying problems” as he set out a vision for reforms over the next decade.

“In the depths of the Second World War, when just about everything had gone wrong, the government sketched out a vision of the post-war new Jerusalem that they wanted to build, and that is what we’re doing now, in the teeth of this pandemic.”

He said the Tories would help people take their first step on the housing ladder with 95% mortgages, transforming “generation rent into generation buy” with the greatest expansion of home ownership since the Thatcher era.

Along with reforms to the “sclerotic” planning system, Mr Johnson said: “We need now to take forward one of the key proposals of our manifesto of 2019: giving young, first-time buyers the chance to take out a long-term, fixed-rate mortgage of up to 95% of the value of the home, vastly reducing the size of the deposit.”

This could create two million more owner-occupiers, “the biggest expansion of home ownership since the 1980s”.

In a wide-ranging speech full of ambition but lacking in detail:

– Mr Johnson promised to “fix the injustice of care home funding” by “bringing the magic of averages to the rescue of millions”, although aides were unable to set out what he meant.

–  The Prime Minister said he wanted to explore the use of one-to-one teaching for gifted pupils or those in danger of falling behind, saying it could be “transformational”.

–  He attacked “lefty human rights lawyers and other do-gooders” who had “hamstrung” the legal system.

The Prime Minister confirmed plans for the UK to become a world leader in clean energy, with “every home” powered by offshore wind by 2030 – a U-turn on his previous criticism of the power source.

In his speech, Mr Johnson said: “I remember how some people used to sneer at wind power, 20 years ago, and say that it wouldn’t pull the skin off a rice pudding.”

Mr Johnson had used that language in his criticism of wind power just seven years ago.

Mr Johnson used his speech to target the Labour leadership for wanting to “pull statues down, to re-write the history of our country” to make it “look more politically correct”.

Sir Keir Starmer’s party had “sniped from the sidelines” in response to the coronavirus crisis, Mr Johnson said.

But deputy Labour leader Angela Rayner said: “The British people needed to hear the Prime Minister set out how he and his government will get a grip of the crisis.

“Instead we got the usual bluster and no plan for the months ahead.”