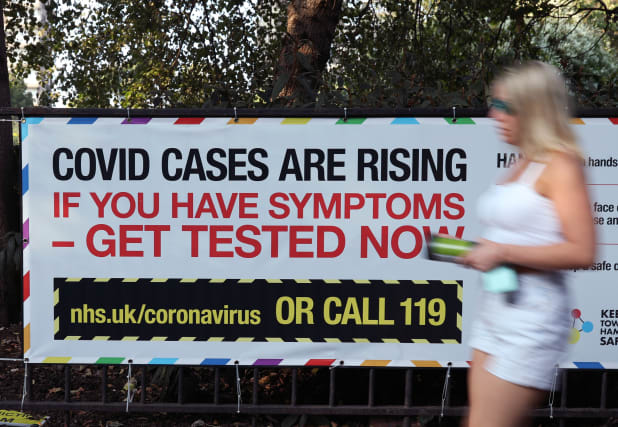 Conservative critics are calling for significant Government movement on the 10pm pub curfew and the inclusion of children in “rule of six” regulations for gatherings.

Leading rebel Steve Baker, who has organised a meeting with like-minded Tory MPs on Tuesday lunchtime to discuss tactics, said he does not expect to defeat the Government, but instead get ministers to shift ground.

MPs will vote on Tuesday, the day the Prime Minister addresses the virtual Tory conference, on the regulations which enforce the rule of six in England in order to allow them to continue.

Mr Baker told the PA news agency: “Consensus among Conservative MPs seems to be around two points – that children should be excluded from the rule of six and that the 10pm curfew is not justified by evidence.

“I wouldn’t expect to win a vote on either issue. The reality is we need to persuade the Government on all these matters.

“With Labour and the SNP missing in action we won’t be defeating the Government in any rebellions.”

Mr Baker said hard negotiations were happening in order to “keep the Conservative Party together”.

Rebel sources told the PA news agency they expected Health Secretary Matt Hancock would indicate the two main sources of contention – the pub curfew and the rule of six – would be reviewed after going through Parliament in a bid to defuse the situation.

Mr Baker said: “The reality is now that we are in to a long hard business of negotiating with the Government trying to keep the Conservative Party together.

“And trying to persuade the Government to have restrictions which don’t do more harm than good.”

Leading Tory backbencher Sir Geoffrey Clifton-Brown said he would back the Government due to increasing Covid cases.

He told the the PA news agency: “I think we have got to recognise that the figures are climbing all the time.

The disquiet on Tory benches comes as the Government is embroiled in major controversy over the performance of the coronavirus test and trace system as thousands of positive coronavirus cases were initially not recorded in England due to a technical glitch.

Mr Johnson has urged MPs to back the rule of six measures aimed at curbing the spread of coronavirus ahead of the Commons vote.

The Prime Minister’s official spokesman said the ban on more than six people mixing was a “sensible and helpful” measure.

There has been mounting unease within Tory ranks about restrictions on people’s liberties and Mr Johnson has acknowledged some people are “furious” with the Government.

The Prime Minister’s spokesman said: “You have heard him talk a lot in recent days about the steps that we have had to take.”

Mr Johnson suggested it would soon become apparent whether the tougher measures introduced in recent weeks were helping to slow the spread of coronavirus.

The Prime Minister told reporters: “The crucial thing is that in the next few days, week, we’ll see more clearly whether some of the restrictions that we put in – the extra enforcement of the rule of six, the extra enforcement of self-isolation, the rules on masks and so on – all the stuff that has come in, we’ll see whether that starts to work in driving down the virus.”

Labour sources told the PA news agency they did not not discuss parliamentary whipping arrangements in advance.