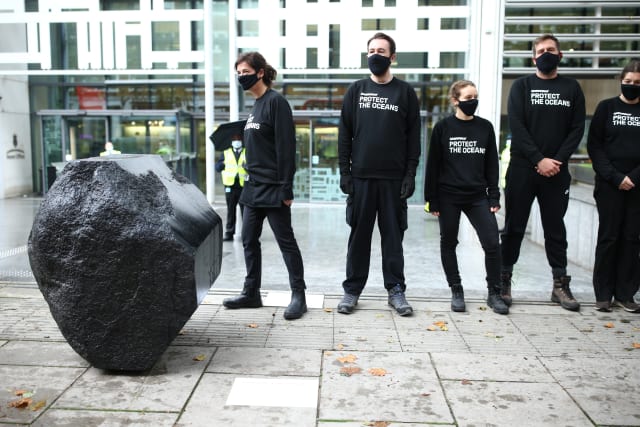 A 1.25 ton sculpture has been delivered to the doorstep of a government department as part of protests calling for protection of UK seas.

The Full Stop sculpture by artist Fiona Banner aka The Vanity Press arrived at the Environment Department (Defra) in support of Greenpeace action to put boulders in a protected area of the North Sea to halt damaging fishing.

Greenpeace said the inert boulders, which they were spacing at precise intervals inside the Dogger Bank protected area, would not have a significant impact on the seabed but would stop destructive bottom trawling.

This fishing method, in which heavy weighted nets are dragged across the sea floor to catch fish, is destroying the seabed that the protected area designation for Dogger Bank is designed to conserve, Greenpeace warned.

The sculpture, Klang, is one of a series of three Full Stop artworks, the other two of which will be loaded onto the Greenpeace ship Esperanza on Monday afternoon and deployed as an installation at sea in the Dogger Bank.

They will complete an area of 50 square miles protected by the “boulder barrier” that Greenpeace has set up to prevent bottom trawling by ensuring that the heavy nets would get snagged and damaged by the granite boulders.

Campaigners and the artist have pledged to remove the artworks if the UK Government makes a “credible commitment” to immediately ban industrial fishing from the Dogger Bank and all of the UK’s offshore marine protected areas.

Greenpeace said members of the local fishing industry had also come out in support of their action.

The shallow sandbank habitat of Dogger Bank, is home to crabs, starfish, flatfish and sandeels which are food for seabirds such as puffins, porpoises, dolphins and fish such as cod.

Environmentalists accuse the Government of failing to properly protect the area, despite its designation as a special area of conservation (SAC), by not fully restricting damaging fishing activity.

Fiona Banner aka The Vanity Press, said: “The pandemic has made us all more alert to the precariousness of nature and our ecology.

“At a time when words like ‘climate crisis’ and ‘emergency’ have been repeated to the point of diluting their urgency, I hope these new works and physical gestures carry a clear message and act as a calling card for the government to take action – a call to stop, reconsider and act.”

Philip Evans, an oceans campaigner at Greenpeace UK, said:  “This sculpture symbolises our Government’s abject failure to protect our most important marine habitats from destructive and illegal fishing.

“Marine protected areas like the Dogger Bank are protected in name only.

“Our boulder barrier will keep bottom trawlers out of almost 50 square miles of the Dogger Bank, but for our oceans to be properly protected, the Government must step in.”

One of the local fishermen supporting Greenpeace’s action, Adrian Noble, who is based in Whitby, said: “Over the last 10 years bottom trawlers have decimated the crab and lobster grounds off Whitby, destroying our crab pots with no regard for our living.

“These bottom trawlers have been targeting the Dogger Bank, killing everything in the process.

“Thank God Greenpeace has got involved, stopping these vandals from wrecking the sea by putting these boulders down.

“It is a protected area so these destructive industrial boats shouldn’t be there.”