What the US election means for the ‘special relationship’ 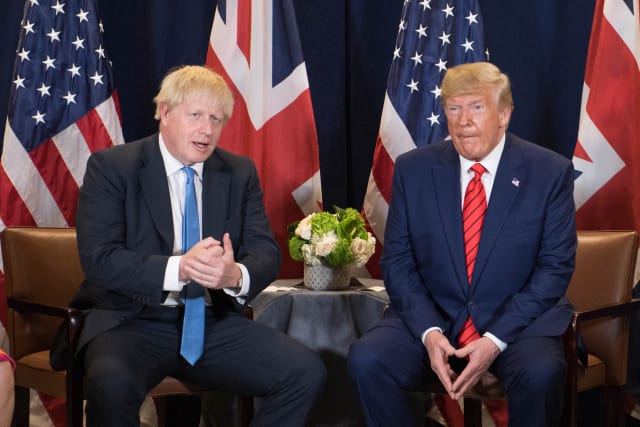 A Joe Biden victory in the US election could improve the state of the special relationship with the UK – but the issues surrounding Brexit and the Irish border could throw a spanner in the works, according to an expert.

The US-UK relationship has been turbulent under Donald Trump, although he has repeatedly praised Boris Johnson and backed Brexit.

A Biden administration is expected to put a much greater focus on international diplomacy – including with the UK – than the Trump White House’s “America first” agenda.

But in an early sign of trouble that could come if the Democrat wins November’s election, Mr Biden has already issued a stark warning about Mr Johnson’s apparent willingness to tear up the Brexit divorce deal over the measures aimed at addressing issues around the Irish border.

Dr Leslie Vinjamuri, director of the US and the Americas programme at the Chatham House foreign affairs think tank, said Mr Johnson’s Government appeared to have been “tone deaf” over the way Democrats would respond.

The UK Internal Market Bill gives ministers the power to break international law by ignoring requirements contained in the Northern Ireland Protocol agreed by Mr Johnson and the EU.

Dr Vinjamuri said: “Britain and America are incredibly important to each other and there is the best will in the world to make sure that that relationship works, and that will certainly be a key priority for a Biden administration – the culture, the history, the intelligence-sharing, the natural collaboration at the level of the executive, this is deep stuff.”

If Mr Biden wins, there will be an effort to “rehabilitate and repair and restore” America’s standing in the world and “the British are going to be right near the top of the list”.

“But there’s still going to be some tough diplomacy on some, you know, regulatory issues, on Ireland, on any number of things that have to be worked through and everybody’s just waiting to see exactly what’s going to happen between the UK and Europe,” Dr Vinjamuri added.

Democrats in Congress and in a Biden administration would be “extraordinarily committed” to the Good Friday Agreement and keeping the Irish border open.

“The British Government seems to be tone deaf on this right now, they just don’t seem to have any great interest in US political pressure on this front,” Dr Vinjamuri said.

“It’ll be more interesting to see how Boris Johnson reacts if there’s a new US administration with a tough position. I think it’s pretty clear where the Americans are going on this but it’s not at all clear where Johnson and co are going.”

Mr Biden wants the US to again take a leading role in world diplomacy, with plans for a “summit for democracy” in a bid to unite like-minded nations, in part a response to the rise of China.

“It’s going to be more diplomatic approach to everything,” Dr Vinjamuri said, although “it’s such a low bar, it’s hard to imagine anything but more diplomacy”.

But after Brexit, there is speculation that Berlin rather than London may be Mr Biden’s main focus in Europe.

“There are a lot of people that think that you know Britain’s gonna suffer in the transatlantic partnership because America and especially many of many of those on Biden’s team are just going to be much more invested in fostering America’s relationship with Germany,” Dr Vinjamuri said.

“I think there is something to that but I think that, you know, at the end of the day America does seem to keep coming back to the UK. The problem is that the UK just, once you leave it, it looks so small and like it’s getting smaller in terms of its outlook and engagement.”

If President Trump wins a second term, it could see him emboldened to further distance the US from international allies.

The US leader has already said he will pull funding from the World Health Organisation and withdraw from the Paris climate accord.

Former national security adviser John Bolton has suggested that Mr Trump could go further and pull the US out of Nato, a move which would have deep repercussions in the UK and across Europe.

He told Times Radio that Mr Trump had come close to saying he wanted to withdraw from the alliance – which he believes relies too much on US spending – in 2018.

“It wasn’t that we convinced him that Nato is actually a pretty good alliance, but that he just saw he couldn’t go across the line and actually call for withdrawal. Now, once he’s re-elected, that political guardrail – if it doesn’t disappear entirely – it’s substantially diminished.

“He doesn’t have to worry as much about the US political blowback.”