What has Trump had to say about leading UK figures since he has been president? 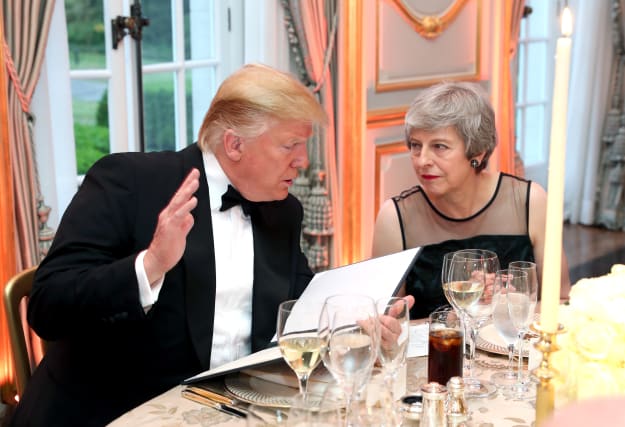 US President Donald Trump has often made his feelings about other world leaders well known, whether that be on Twitter or by speaking to reporters.

Here is some of what he has had to say about British politicians and other figures since he won his place at the White House.

After the president shared a number of videos from far-right group Britain First on social media in November 2017, the then-prime minister’s spokesman said it was “wrong for the president to have done this”.

The president responded by tweeting about Mrs May: “Don’t focus on me, focus on the destructive Radical Islamic Terrorism that is taking place within the United Kingdom. We are doing just fine!”

Mr Trump was highly critical of her handling of Brexit negotiations, and more sour words were exchanged when British ambassador to the US Sir Kim Darroch resigned over emails critical of the White House in July 2019.

He tweeted: “I have been very critical about the way the U.K. and Prime Minister Theresa May handled Brexit. What a mess she and her representatives have created. I told her how it should be done, but she decided to go another way. I do not know the Ambassador, but he is not liked or well thought of within the U.S. We will no longer deal with him.

“The good news for the wonderful United Kingdom is that they will soon have a new Prime Minister.”

He added the next day: “I told @theresa_may how to do that deal, but she went her own foolish way-was unable to get it done. A disaster!”

However, when Mrs May was forced to set out a timetable to exit Number 10, Mr Trump called her “a good woman, she worked very hard, she’s very strong”.

President Trump has generally been favourable towards Prime Minister Boris Johnson, throwing his support behind him before he was elected as Conservative leader and since.

In a June 2019 interview with The Sun, while the Tory leadership race was ongoing, Mr Trump said: “I actually have studied it very hard.

“I know the different players. But I think Boris would do a very good job. I think he would be excellent. I like him. I have always liked him.

“I don’t know that he is going to be chosen but I think he is a very good guy, a very talented person.”

His support continued in August 2019 when he said it “would be very hard for Jeremy Corbyn, the leader of Britain’s Labour Party, to seek a no-confidence vote against New Prime Minister Boris Johnson, especially in light of the fact that Boris is exactly what the U.K. has been looking for”.

“We can’t make a trade deal with the UK because I think we can do many times the numbers that we’re doing right now and certainly much bigger numbers than you are doing under the European Union.”

When Mr Johnson was in intensive care with Covid-19 in April 2020, the president said he had asked “brilliant companies” to help his “really good friend”.

He told reporters: “We contacted all of Boris’s doctors, and we’ll see what is going to take place.

“I’ve asked two of the leading companies, these are brilliant companies – Ebola, Aids, others – they’ve come up with the solutions and just have done incredible jobs.

“And I’ve asked them to contact London immediately, they have offices in London, these are major companies. But more than major, more than size – they’re genius.”

– On the royal family

The president praised the royals during his state visit in summer 2019, saying: “The Queen and the entire royal family have been fantastic.

“The relationship with the United Kingdom is very strong.”

However, he has been critical of the Duke and Duchess of Sussex on a number of occasions.

And he tweeted following their departure from the royal family in 2020: “I am a great friend and admirer of the Queen & the United Kingdom. It was reported that Harry and Meghan, who left the Kingdom, would reside permanently in Canada. Now they have left Canada for the U.S. however, the U.S. will not pay for their security protection. They must pay!”

When the couple intervened in the 2020 election campaign and urged people to vote, Mr Trump told reporters: “I’m not a fan of hers and I would say this, and she probably has heard that. But I wish a lot of luck to Harry, cause he’s going to need it.”

On his state visit to the UK in June 2019, President Trump said during a press conference with then-prime minister Mrs May that “I think everything with the trade deal is on the table” post-Brexit.

However, six months later when he was in the UK again for a Nato summit, Mr Trump did not seem as interested in the health service, telling reporters: “We have absolutely nothing to do with (the NHS), and we wouldn’t want to.

“If you handed it to us on a silver platter, we’d want nothing to do with it.”