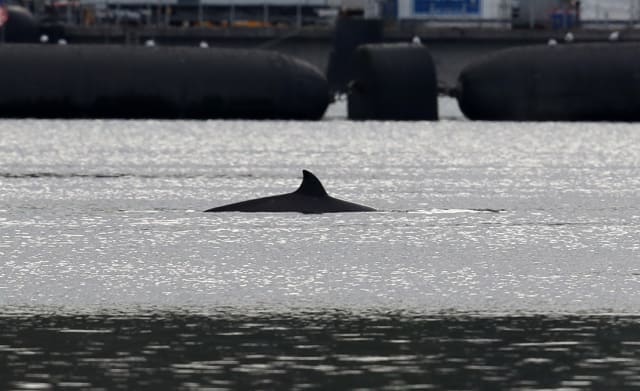 Three whales remained in the water at Garelochhead after an attempt to rescue the pod.

A joint organisational response comprised of the British Divers Marine Life Rescue (BDMLR), Ministry of Defence, as well as local volunteers, aimed to get the northern bottlenose whales back out to sea ahead of a major international military exercise.

It is understood the operation was stood down at around 6.30pm due to the loss of daylight.

Rescuers were trying to shepherd the animals out of Loch Long amid concerns over the impact that Exercise Joint Warrior planned for the area could have on them.

Medics from the BDMLR have monitored the pod for the last month in and around the River Clyde.

The operation to move the whales began on Thursday at 10.30am with several small vessels in the water to encourage the animals to move down the loch into deep water where they can feed.

BDMLR tweeted an update at 12.20pm, saying: “The first group of boats are in position and gently moving the whales towards the mouth.

“They will form a barrier with boats in position to prevent the animals turning in the wrong direction.

“The shore-based teams are monitoring all movement.”

Later on Thursday afternoon, a spokeswoman for the Royal Navy said: “The first attempt this morning to move the pod was working well until they reached the Rhu Channel.

“The pod then broke off and went back to Garelochhead. Attempt number two is currently under way.”

A pair of whales first seen in Loch Goil were spotted at the mouth of the Clyde near Millport on the Isle of Cumbrae some weeks ago.

Since then five whales have been spotted in separate locations in Loch Long, with some entering smaller lochs nearby.

Northern bottlenose whales are a deep-diving species normally found off the edge of the continental shelf to the west of the UK and Ireland.

A spokesman for the Royal Navy at Faslane told the PA news agency that members of Queen’s Harbour Master (QHM) Clyde, based at HM Naval Base Clyde, met BDMLR on Wednesday.

Several vessels from the Ministry of Defence Police’s Clyde Marine Unit are involved with representatives from the QHM Clyde organisation – both on the water and in harbour control.

An MoD spokesman said: “The Royal Navy takes its environmental responsibilities very seriously and continues to work with the relevant UK authorities to ensure all practical measures required to reduce environmental risk and comply with legislation are taken.

“A necessary series of safety checks is observed and an environmental risk assessment is carried out before any underwater task is undertaken by MoD, to minimise any potential risk to marine life.”