Sophie meets filmstar alpaca – and is not amused 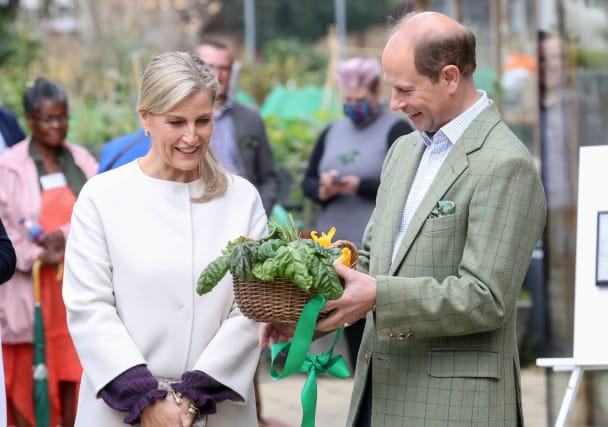 The Countess of Wessex came face to face with a four-legged actor – but was not impressed by his movie star looks.

When Sophie was introduced to Jerry the alpaca during a visit to an inner city farm she quipped “You’ve got a funny face,” before adding: “I suppose you must think I have a funny face too.”

Jerry was soon joined by fellow alpacas Tom and Ben – a trio who were hired to appear in the multi-million pound blockbuster Star Wars: The Force Awakens.

The Earl and Countess of Wessex got up close with the animals at Vauxhall City Farm before seeing its community engagement programmes in action.

They joined staff, volunteers, local residents and schoolchildren as the farm marked the start of Black
History Month.

Monica Tyler, the farm’s chief executive officer, said: “They said it was a fantastic community facility. Having such an environment is so important. Giving children access to so many different animals in urban areas is great for openness and freedom.”

The farm closed during the lockdown and lost 80% of its income due to the pandemic and is now fundraising for the lost funds.

Black History Month is aimed at schools in the local area, with teachers and students sharing stories and poems about important figures in black history.

The couple also met graduates of the farm’s New Shoots programme. One of them, Christopher Manturine, and ex-mentee, spent six weeks on a programme on the farm.

Mr Manturine, 28, from Barnet, north London, who suffered from depression, said his time at the farm was the first step to recovery.

“I had never had any contact with animals and as soon as I stepped foot in here it had an amazing impact upon me.

“My time on the programme was a watershed moment for me. Since then I have gone from strength to strength. I have had two promotions and am on the right path.”

The six-week programme, which is free of charge, helps equip unemployed young people aged 16-25 years with the skills to gain employment, and provides access to career guidance, mentoring and training.

Staff and volunteers at the farm also spoke to Edward and Sophie about adapting to the new measures in place at the farm since re-opening, and their efforts to continue looking after the animals during lockdown.

Vauxhall City Farm is one of the oldest central city farms in London, founded more than 40 years ago.

The farm provides valuable education, recreation and health benefits to the local community, as well as offering regular educational and vocational activities to local schools.

A new community garden is also being created at the farm, which will include an educational therapy hub that uses gardening and horticulture to support children and adults facing physical and mental health challenges.