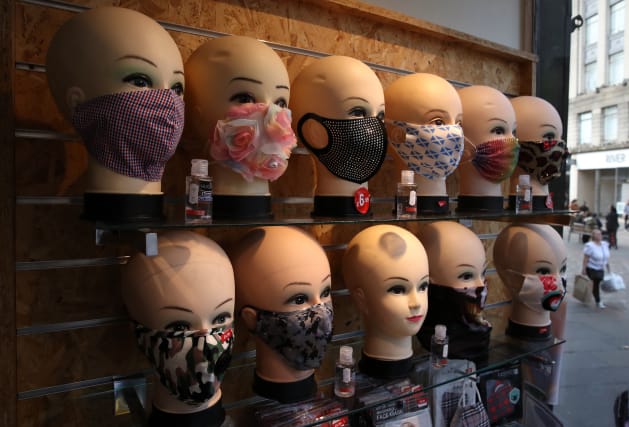 Restrictions across the north of England may be pushing down the growth of the coronavirus epidemic, the leader of a large-scale Covid-19 study has said.

Professor Paul Elliott, director of the React study – the largest research of its kind in England – said new rules appeared to be taking effect but warned that all age groups were contracting the virus.

He told BBC Radio 4’s Today programme: “We’ve seen a seven-fold increase in the number of people carrying the virus at the age of 65 and over.

“So clearly this is happening across the whole population, not just in the younger people.

“In the very recent data, and we’re talking about people who did swabs last Saturday, it does seem that the rate of increase of the infection may have slowed a bit.

“So that does suggest that perhaps some of the recent announcements and the biggest focus again on people paying attention to the public health message, which is social distancing, handwashing, face covers and getting tested if they have symptoms and then isolation, seems to be beginning to work.”

Prof Elliott said the numbers of people who now have the virus has “grown substantially” but the growth appeared to be slowing.

“We’ve seen the doubling time – from the last time we did the survey to now – has reduced to about 10 days … from seven to eight days, so that has been slowing,” he said.

“In the very recent data, it does seem to be that increases seems to be turning down, but from high levels of the virus.

“So we really need to get the virus turning down and the R value going below one and we haven’t yet seen that.

“At the moment, we seem to be still at very high levels of the virus, and we do seem to still have a bit of an upward trajectory, but that very fast increase in the virus seems to have slowed and that’s very encouraging.”

Prof Elliott urged people to “redouble” their efforts to follow the guidance, adding the country is in “a very critical period right now”.

He said there was “wide uncertainty” around the reproductive number – the R number – which the study estimates to be around 1.1.

For the research, more than 80,000 volunteers were tested in England from September 18-26.

It found around one in 200 people were infected with coronavirus.

The study is examining levels of infection in the general population by testing more than 150,000 participants each month over a two-week period.

Interim results from the fourth report of the study, published on Thursday, show around 55 people per 10,000 tested positive, which is an increase on 13 people per 10,000 in the previous study between August 24 and September 7.

This implies 411,000 people in England have the virus, meaning over one in 200 people were infected at any one time.

Findings also show that the prevalence of infection was the highest among those aged 18-24 – with one in 100 people infected – while cases increased seven-fold in those aged over 65 from 0.04% to 0.29% compared to the last report.

The north-west of England, which has seen areas such as Burnley and Liverpool placed under local restrictions, had the highest levels of infection, while the number of infections in London increased five-fold from 0.10% to 0.49%.

The final report and findings of all 150,000 volunteers tested between September 18 and October 5 will be published next week.

While findings of the study, commissioned by the Department of Health and Social Care, show the R rate has decreased from 1.7 to 1.1, scientists say this could suggest some deceleration “but with considerable uncertainty”.

Half of the volunteers who tested positive did not have symptoms at the time of testing or the week before, but it was noted that this did not mean they did not later develop symptoms.

The study also found people of Asian and black ethnicity are twice as likely to have the virus compared to white people.

Kelly Beaver, managing director of public affairs at Ipsos Mori, which worked on the study, said: “The continuing support of the public by taking part in the study is something we remain immensely grateful for.

“The number of participants gives this study the robustness and thoroughness which marks it out as world leading.”