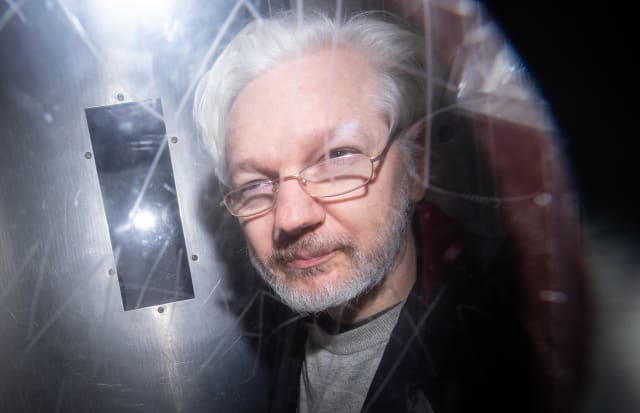 WikiLeaks founder Julian Assange’s fiancee vowed to continue the “fight for his life” as he faces Christmas behind bars waiting to find out if he will be extradited to the United States.

The 49-year-old was arrested on a fresh 18-count indictment, alleging a plot to hack computers and conspiracy to obtain and disclose national defence information, at the start of a four-week evidential hearing at the Old Bailey last month.

He is wanted in the US following the publication of hundreds of thousands of leaked documents in 2010 and 2011 relating to the Afghanistan and Iraq wars, as well as diplomatic cables.

Judge Vanessa Baraitser adjourned the case on Thursday until January 4 when she will deliver her ruling on whether he should be extradited.

She remanded Assange, who has already spent 16 months at Belmarsh top security jail, in custody and said he will next appear at Westminster Magistrates’ Court for an administrative hearing on October 29.

Speaking outside court, his fiancee Stella Moris, with whom Assange fathered two children during his seven-year stay at London’s Ecuadorian embassy, thanked supporters for helping “us continue this fight”.

“It is a frontal assault on journalism, on the public’s right to know and our ability to hold governments, domestic and foreign, to account.

“The perpetrators of those crimes are not in prison. But Julian is.

“Julian is a publisher.

“Julian is also a son, a friend, my fiancee and a father.

“Our children need their father.

“And our democracy needs a free press.”

Assange’s legal team called dozens of witnesses in a bid to persuade the district judge to block his extradition.

He denies plotting with defence analyst Chelsea Manning to crack an encrypted password on US Department of Defence computers and says there is no evidence WikiLeaks’ publications put US informants’ lives at risk.

His lawyers claim the prosecution under Donald Trump is politically motivated, after an investigation launched under President Barack Obama failed to bring charges.

His lawyer Jennifer Robinson described a meeting in August 2017 in which he was offered a pardon allegedly on behalf of Mr Trump to identify the source of the Democratic National Committee leaks to WikiLeaks which boosted him in the 2016 election in order to end speculation over Russian involvement.

Meanwhile, a security contractor was allegedly recruited by “American friends” to bug Assange’s meetings at the Ecuadorian embassy.

By December 2017, the US contacts were said to be “desperate”, and even discussed a potential kidnap or poison plot to end the stalemate.

If Assange was convicted, he could face up to 175 years in a Supermax ADX facility in Colorado, where convicted terrorist Abu Hamza has been housed under Sams in solitary confinement, the court heard.

Such conditions would be torturous for Assange, who was said to have Asperger’s syndrome.

Psychiatrists for the defence said he had suffered from severe depression and was a high suicide risk.

But lawyers for the US Government said the prospect of Assange being held under Sams is “speculative” and his sentence was likely to be between four and six years.

Throughout the hearings in Court 10, pro-Assange protesters have staged noisy and colourful demonstrations outside the historic central London court, shouting, banging drums and a glockenspiel.

Mr Assange’s father, John Shipton, had been joined by the artist Ai Weiwei and designer Dame Vivienne Westwood, who also lent their support.

Dozens of journalists watched by video link or in a socially-distanced courtroom next door, due to Covid-19 restrictions, as the majority of witnesses gave evidence remotely from the US.